Binding is looking for Frankfurt originals again
from FFM Aktuell 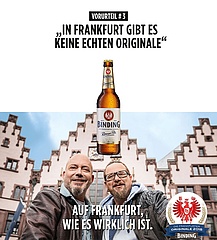 There is no question that Binding is a Frankfurt original. And as such, the traditional brewery is naturally predestined to award Frankfurt originals itself. Who that is, you decide. Together with the comedy duo Mundstuhl, who have already been ambassadors for this wonderful campaign in the past two years, Binding is calling on you to nominate your personal Frankfurt original in three categories from now until 28 October. The suggestions with the most nominations will then be voted on in a second phase starting November 12 until December 9. A total of five nominees per category can qualify for the finals, making a total of 15 finalists.

The following categories are up for selection:

The first category is "The Frankfurt Personality". In 2017 Moses Pelham could be happy about the award. Every Frankfurt citizen who is inseparably connected to our beautiful city and has rendered outstanding services to it in a special way - whether politically, culturally or socially - may be nominated.

The second category is"The Best Binding Gastronomy". Last year the choice fell on the Lohrberg-Schänke. Do you share this opinion? Or which location in Frankfurt do you see on the first place? The prerequisite is, of course, that Binding beer is served there! It will be interesting to see who makes it onto the winners' podium in 2018.

Category three is "The most popular district association". Clubs are an important cohesion of the social community in the individual districts. Not only is there a party, there is also a lot of voluntary work - and that simply has to be appreciated. You can contribute to this with your nomination. It doesn't matter whether it's a theatre, music, sports or allotment association - anyone who is entered in Frankfurt's register of associations can be nominated by you for voting, just like the Bernemer Kerwe Gesellschaft e.V., which was voted "Most Popular District Association" in 2017.

And when the winners are determined, there will be unique events where your Frankfurt originals will be really celebrated.

And now it's your turn: Join in and send your nominations. Determine who, like Binding Brewery, simply belongs to Frankfurt like music to Handkäs.