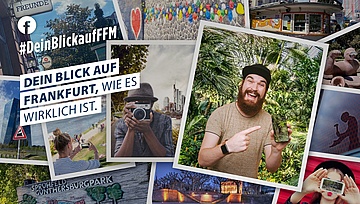 A lot of things are unfortunately not allowed or simply not feasible at the moment. But luckily one thing is still possible: walking through the city and taking great photos. Even in these difficult times you can capture some of the most lovable and livable sides of Frankfurt. And it is precisely these sides that are the subject of the photo competition "Your View of Frankfurt", which the Binding Brewery launched today, Monday. The competition is a continuation of the campaign "On Frankfurt as it really is". The search is now not necessarily for the usual skyline motifs, but rather for photos that look behind the obvious and offer the viewer an unusual perspective. Until May 31st proposals can be submitted HERE on the campaign page. A jury will then make a preselection of the ten best pictures, which can then be voted for online from 21 June. Three main prizes await the participants.

The photo competition "Your View of Frankfurt" is intended to dispel the prejudices against Frankfurt as the most underestimated major city in Germany. Therefore, the traditional brewery Binding invites you to show the most beautiful and perhaps still unknown sides of the city. That's why the competition calls for new, refreshing and interesting perspectives. Frankfurt and Frankfurt lovers now have the opportunity to submit their very personal photographic view of the city's gems with up to three photos on a specially created campaign page of the Binding brewery.

And this is how it works

From the photos submitted by 31. May, an expert jury - consisting of Binding brand ambassadors Mundstuhl, Frankfurt street photographer Max King and photographer and photojournalist Dirk Ostermeier (both Journal Frankfurt), Angela Kropp from the label Frankfurtliebe and representatives of the Binding brewery - will select the TOP 10.

From June 21 to July 11, the fan community will then vote for three winners via the brewery's campaign page. The first place winner will win 5,000 euros. The runner-up can look forward to 3,000 euros and the third place winner to 1,000 euros.

The Binding Brewery photo contest will be actively promoted both in advance and during the hot period. After the competition, the pictures will be used for exhibitions in various museums or galleries, in Frankfurt restaurants, in the Binding brewhouse, in the Binding Bulli and on social media, among other things. For more information on the photo competition, registration and the process, please visit the campaign page at: https://aktion.binding.de