Binding supports reconstruction of the Goetheturm
from FFM Aktuell 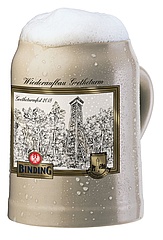 It has now been another year since the Goetheturm, one of Frankfurt's most beloved landmarks, burned down. The reconstruction, which is to be closely based on the original, is targeted for next year, so that we can expect the new Goetheturm to open in 2020. Of course, the planning and execution of the new building will incur high costs, most of which will be borne by the insurance company. The rest, however, will be covered primarily by donations. The Binding Brewery was already able to contribute a large amount of 15,000 euros in February through a sales campaign. Now another 7,000 euros will be added to this sum, which will come from the sale of limited-edition Binding steins. One year after the fire, this donation was officially presented to the city of Frankfurt.

"We are very pleased that on the anniversary of the fire we can once again present a cheque for the reconstruction of the Goetheturm," Claudia Geisler, press spokeswoman for the Binding brewery, is pleased to say. "As a traditional Frankfurt brewery, the construction of the new tower is naturally close to our hearts and it is great that the people of Frankfurt have bought our stone mugs with the motif of the old Goetheturm in such large numbers at the Goetheturm Festival as well as at the Sachsenhausen Christmas Market and in the Goetheruh restaurant. At this point I would also like to thank the Vereinsring Sachsenhausen, the Sachsenhausen Hunting Club as well as Roman Schmidt-Peccolo and Jens Breidenstein."

If you add the 15,000 euros from the campaign, in which 50 cents of every crate of Binding Römer Pils sold in Frankfurt stores was diverted to benefit the Goetheturm, then a total of 22,000 euros has now flowed from Binding to the City of Frankfurt into the official donation account. The donations are urgently needed, because the cost of the planned reconstruction is estimated at around two million euros.