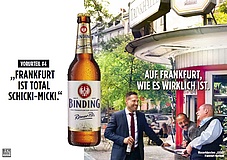 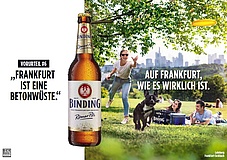 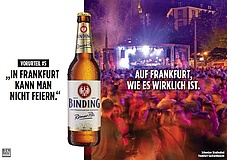 I'm sure every Frankfurter has experienced this at some point: in conversations with non-Frankfurters, you've been confronted with a whole range of prejudices. There is certainly a kernel of truth in some of them, but many simply do not correspond to reality. Now the Binding Brewery, a true Frankfurt original, wants to dispel such prejudices in the form of a campaign: "Here's to Frankfurt as it really is". is the slogan from 23 July, when Binding launches a new campaign in the city and Rhine-Main region after a long absence from advertising.

"With our new campaign, we are celebrating the most livable and lovable sides of Germany's most underrated big city," says Claudia Geisler, responsible for marketing/PR at Binding Brewery. "On initially three motifs, we dissolve preconceptions about Frankfurt by showing people in authentic places of our hometown - and thus real life. Because Binding loves Frankfurt!"

Instead of concrete wasteland idyllic Lohrberg

For example, the campaign wants to show that Frankfurt is not just the city of high-rises, where only chic-chic bankers hang out. It wants to show that Frankfurt is also a very green city, not just a concrete wasteland, and that it is also a great place to party - as shown, for example, in the campaign motif from the Swiss street festival. The campaign thrives on the self-confident response, for example when a man in a fine suit enjoys the informal get-together at the water house.

Whoever lives here knows: Frankfurt is quite different from what the distant view of the bank towers initially suggests. And Binding is now directing the view to the real Frankfurt. The new campaign of the Frankfurt original for its home town can be seen on more than 1,600 city, megalights and large surfaces. Billposting will start on 23 July. Activities on social media and at events are also planned.

Just like the true soul of Frankfurt and its people, so is its beer. Binding, brewed in the heart of its hometown - and has been for more than 145 years. It was 1 August 1870 when Conrad Binding, who gave the brewery its name, founded his own brewery and thus laid the foundation stone for today's Binding brewery. Dedicated employees who continue the tradition of Conrad Binding every day ensure that every beer lover gets their money's worth. You can also find more information at: <link http: www.binding.de _blank>www.binding.de