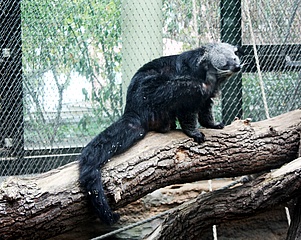 (ffm) Since a few days you can observe a big black animal in the orangutan enclosure in the great ape house Borgori Forest: It is Binturong Theo. Bear or cat? The appearance of the Binturong with its shaggy black fur and pointed ears does not allow an easy classification at first sight. Binturongs are also called marten bears, but they belong to the family of creeping cats.

Newcomer Theo lies on a tree trunk and sleeps, he yawns, scratches himself, yawns again. At best, he makes a quick circuit. "The big eyes indicate that binturongs are crepuscular and nocturnal - so Theo isn't lazy, he's tired!" explains zoo director Miguel Casares.

Theo has already had a bit of a journey: born in Saint-Martin-la-Plaine in France in 2005, he then came to Frankfurt via Arnhem (Netherlands) and Cambron (Belgium). "Our plan is to socialise Theo with the Sumatran orangutans. Both animal species also share the habitat in their home in South and Southeast Asia. However, the process of getting used to each other is not yet complete; we are proceeding very slowly and cautiously. It can also be the case that the animals do not get along so well with each other," says Casares. As in Ukumari Land, where spectacled bears have been socialised with forest dogs and great anteaters with howler monkeys, it is hoped that this will improve the behaviour of both species. An exciting new species has been added for visitors to the zoo.

Binturongs (Arctictis binturong) are large, handsome animals. They can reach weights of 15 kilograms or more and can live to be about 25 years old. They live in tropical and subtropical rainforests as well as grasslands. Despite their somewhat clumsy appearance, they are true climbing artists. Their sharp claws, prehensile tail and strong legs help them to move around nimbly. Binturongs are solitary animals. They feed on fruit, but also eat carrion, small animals, fish and birds. Females are larger and heavier than males-a rarity among mammals.

The binturong's meat is considered a delicacy in some places, so the animals are hunted. Deforestation of their habitat has drastically reduced their population in the wild, and they are classified as endangered by the IUCN.

Theo is not the first binturong at Frankfurt Zoo. Already from 1925 to about 1930 this species was kept in Frankfurt