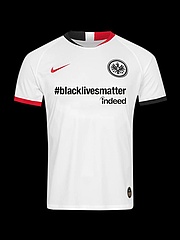 Eintracht Frankfurt will send another strong message against racism and xenophobia in today's away DFB Cup semi-final match at FC Bayern Munich. The 2018 DFB Cup winners will line up tonight with the words "#blacklivesmatter" on their jerseys. Black Lives Matter (BLM), translated into German as "Black Lives Matter", is a movement that originated in the United States of America within the Black community. The aim is to campaign against racially motivated violence against people of colour.

In previous years, Eintracht Frankfurt, as the club of a city with a population of 179 nations, had already set an example for a diverse and peaceful coexistence.

As in the past, Eintracht cooperates closely with its main sponsor Indeed. The US-American company provides the jersey chest for #blacklivesmatter. Frank Hensgens, Managing Director Indeed Germany, says: "Due to the dramatic current development, we will use our global platform to stand against historical and current systemic racism, violence and hate. We are proud to partner with Eintracht Frankfurt, united in our shared belief in the importance of diversity and inclusion and in our unwavering opposition to racism. Leaving our jersey breast for #blacklivesmatter is a highly visible sign of our stance against racism and our support of Black people."

Eintracht board member Axel Hellmann emphasizes the necessary sustainability of the action: "We have to keep pointing this out and also use the power and reach of football to bring this important message into the world with force. The history of Eintracht Frankfurt is characterised by cosmopolitanism and international understanding. These attributes are strongly anchored in the Eintracht DNA. Racism, xenophobia, anti-Semitism and homophobia have no place within the Eintracht family and must also have no place in a liberal society." In addition, Hellmann emphasizes the special cooperation with Indeed: "The fact that Indeed supports our cause - even in its short-term nature - shows that we have an exceptionally good partnership that is based not only on economic interests but also on the same understanding of values."

For Eintracht sporting director Fredi Bobic, the support of this action on the part of the team is a matter of course: "We exemplify every day in our team that skin colour, origin and religion play no role in a community. Everyone is there for everyone else - on and off the field. That should also be the case in our society, no matter where. We stand together as a team and as Eintracht Frankfurt against any form of racism and we want to get that out there today accordingly."

In the course of the match day, Eintracht Frankfurt will give priority to black and white images on its social media channels. In addition, the logo will temporarily appear in black. Wednesday night's DFB Cup semi-final will be shown in up to 200 countries, including in Germany on ARD and on pay-TV channel Sky. (Text: Eintracht Frankfurt Fussball AG)