BLAUES WASSER in Frankfurt East burned down
from Frankfurt-Tip 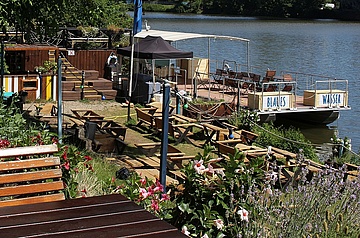 The restaurant BLAUES WASSER, which voted by you as the city's favorite outdoor venue in 2018 has burned down! The fire broke out in the kitchen area Saturday night. Just a short time after firefighters arrived, the fire spread to the rest of the house due to a smoke ignition and also severely damaged the roof. Also not spared by the flames was the beautiful outdoor area, which was completely destroyed by the fire. Fortunately, there was only one person slightly injured in the fire, who was treated on the spot by the rescue service. Also because the restaurant had already closed, no other people came to harm.

The BLAUE WASSER at the Osthafen had developed with great food and an incomparable holiday atmosphere on the former site of a nudist club in a short time to the hottest locations in the city. Simply enjoying a drink on the banks of the Main or at the Rote Bar won over guests just as much as the quality of the restaurant. You could get a little holiday feeling here in the middle of the metropolitan industrial area. Now this beautiful oasis lies in ruins. According to initial estimates, the damage amounts to around 500,000 euros. The cause of the fire is still unclear. At the moment, it is assumed that there was a technical defect.

The damage to the house is unfortunately so great that it can no longer be used. This is a real loss.