BODYGUARD - THE MUSICAL is coming to Frankfurt
from FFM Aktuell 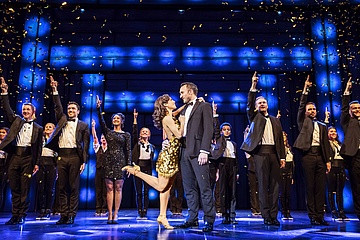 As in previous years, the Alte Oper Frankfurt has once again included a real musical highlight in its programme for the Christmas season, which will accompany the audience into the New Year. This season, the global success BODYGUARD - DAS MUSICAL will provide goosebump moments of a particularly intense kind at the Alte Oper from 18 December 2019 to 11 January 2020. So far, the adaptation of the hit movie has thrilled over 4 million visitors in twelve countries. And with the tour of the German version, which starts in October 2019, quite a few more are guaranteed to come.

From London, the top modern, glamorous stage event conquered the metropolises of the world and can be experienced for the first time in the winter at the Alte Oper Frankfurt. Spectacular choreographies, 16 top hits - sung in English - as well as the gripping love story about superstar Rachel Marron and her bodyguard Frank Farmer guarantee the audience a live experience in a class of its own! It will be rousing, extremely powerful and of course highly emotional at the latest with "I will always love you".

With the premiere at London's West End in 2012, BODYGUARD also became a hit on stage. This is evidenced not only by four nominations for the prestigious Laurence Olivier Award and the coveted WhatsOnStage Award for "Best New Musical" - BODYGUARD - THE MUSICAL is also a crowd puller at the box office.

The film material as a contemporary stage experience

The blockbuster Bodyguard, based on the screenplay by multiple Oscar-nominated author Lawrence Kasdan (among others.Star Wars - The Empire Strikes Back, Indiana Jones - Raiders of the Lost Ark) made the thrilling love story of superstar Rachel Marron and her bodyguard Frank Farmer world-famous. In Germany alone, the film attracted over 6 million viewers to the cinemas. In the musical adaptation by Oscar winner Alexander Dinelaris (Best Screenplay for Birdman), the film material of the nineties is transformed into a stage experience of the present day that is even more glamorous, even more exciting and even more emotional than the film original.

A Musical Full of No. 1 Hits

Just like the film, the musical gets its special touch from the songs on the legendary Grammy Award-winning soundtrack. With over 45 million records sold, it is still the most successful film soundtrack of all time. BODYGUARD - THE MUSICAL also features numerous other No. 1 hits, such as "I Wanna Dance with Somebody", "How Will I Know" or "One Moment in Time". And of course not to forget one of the most beautiful ballads of all time: "I Will Always Love You".