Bolongaropalast has a bell again after 77 years
from FFM Aktuell 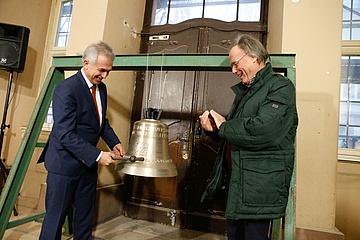 (ffm) In the middle of World War II, on December 13, 1941, the bell of the Bolongaropalast in Höchst was removed. A carpenter named Kaltwasser took it down, the bell found its way to the bell cemetery in Hamburg, was recorded in the archives there - only to disappear forever. Almost exactly 77 years later to the day, on December 21, 2018, the Bolongaro Palace got a new bell. Lord Mayor Peter Feldmann accepted the piece, which weighs 77 kilos and measures 48 centimetres in diameter, together with representatives of the citizens' association Höchster Altstadt.

"When the renovation work on the Bolongaro Palace began, many people wanted to reinstall a bell in the remaining striking mechanism in the clock tower," said Peter Feldmann. Initially, the city searched for the old bell via an appeal on social media. However, this search remained unsuccessful. "The planning for a new bell was started. When the citizens' association Höchster Altstadt heard about it, it was only a small step to the gratifying promise to bear the costs for the new bell."

The citizens' association had agreed to pay for the new bell and to donate it to the town. Nearly 5500 euros invested the association. The bell and art foundry Rincker from Sinn near Wetzlar made the new bell. Its casting on November 2 was a spectacle in which many members of the association wanted to participate - 40 of them drove to Sinn. "This is not the only indication of how much the association stands behind the decision to donate the bell. I am very grateful to all of you for pledging, funding and making it happen. This sense of citizenship is the link that our society cannot do without. We all depend on the citizens' commitment to the common good, on their participation in decision-making and, as in this case, sometimes even on their financial contribution," said Feldmann.

After the handover, the bell will first be put into storage once again. Next spring it will be installed together with the dials of the tower clock. It will be rung after the renovation work has been completed - then it will strike on the hour between 8 and 20 o'clock.

"The bell is intended to document the unwavering will of the people of Höchst to stand up for the interests of the district. The bell may symbolically resound up to the Römer and remind the responsible persons there again and again of the will of the Höchster to engage themselves for the district", said Wolfgang Weber of the citizens' association Höchster Altstadt.

The Höchster Altstadt citizens' association was founded in 1971. Since then, it has been committed to preserving the historic building fabric and the Höchster Altstadt ensemble while improving the quality of living and life. Many events in the district, such as the Old Town Festival or the Christmas Market, can be traced back to initiatives of the Höchster Altstadt Citizens' Association. "The bell is intended to document the unwavering will of the self-confident residents of Höchst to stand up for the interests of the district," says Wolfgang Weber from the board of the citizens' association. And further: "The bell may symbolically resound up to the Römer and remind there the responsible persons again and again of the will of the Höchster to engage themselves for the district."