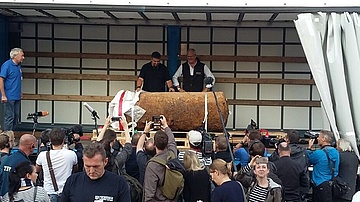 Much praise at final press conference on bomb defusing

The defusing of a World War II bomb has kept all of Frankfurt on tenterhooks over the past few days, but especially on Sunday. Despite a delay caused by some recalcitrant citizens, the evacuation and defusing went ahead as planned. City Councilman Markus Frank said at a final press conference Monday that "a large part of Frankfurt made an important contribution to the defusing." And police chief Gerhard Bereswill also had many words of praise for the population: "We experienced a level of support from the citizens that we have never experienced before." Officers who had to hold out for hours at the barriers would have been provided with drinks, cakes and other snacks by helpful and grateful Frankfurt residents.

In addition to a big thank you to everyone who had left the evacuation area swiftly and without discussion on Sunday morning - many of them already on Saturday - there were also clear words for the few who had hindered the whole process with their intransigence. It will now be examined to what extent these people can be held accountable. A high fine is not excluded there.

Prof. Ries, head of the Frankfurt fire department, admitted that the evacuation had been the biggest challenge of his career so far and that he was grateful that the team of more than 2000 emergency personnel had mastered it so first-class. The importance of social media was also highlighted. After all, the fire brigade had sent out almost 130 tweets in the period surrounding the preparation and the actual defusing in order to inform the population in the best possible way. The good cooperation with the media was also praised here, as this had contributed significantly to making the most important information available to a broad public.

Almost modest was Rene Bennert, who with his colleague Dieter Schwetzler of the explosive ordnance disposal service were celebrated as "heroes of Frankfurt". "We actually had the smallest part to perform," he said at the press conference. He then explained once again the exact procedure during the defusing, which had worked exactly according to plan. "Everything worked on the first try," Bennert said, still overwhelmed by all the media hype.

Frankfurt coped magnificently with the defusing of the bomb and the enormously large evacuation thanks to great helpers, but also thanks to the many helpful citizens. Such a positive balance cannot be taken for granted, emphasized fire chief Ries. Nevertheless, we all hope that we will not experience something like this again in the near future