Bomb discovery in Frankfurt: defusing on Wednesday
from FFM Aktuell 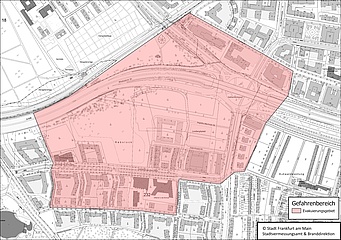 West of the trade fair, a 50-kilogram bomb from World War II was discovered in the Bockenheim district on Monday. The U.S.-type unexploded bomb was found in a construction pit on Felix-Kracht-Strasse. The bomb has already been secured there and is in a stable position. On Wednesday, February 16, it is to be defused by the explosive ordnance disposal service of the state of Hesse (Darmstadt Regional Council) and transported away.

To exclude any risk, the area around the discovery site must be evacuated. This affects about 2300 Frankfurt residents. The exclusion zone is defined by the responsible authorities, as there is great danger to life and limb in the event of a detonation. The fire department has created an accurate interactive map with a search function (see image), which can be used by anyone who lives or works in the area to check whether they are affected by the evacuation. Die Karte kann unter arcg.is/1Wav9r0 abgerufen werden. In addition, there is a list of affected streets and house numbers on the website of the fire department in a timely manner.

Who can leave the area independently, must have left it by 11 am on February 16, per a general order of the city of Frankfurt am Main. The fire department is coordinating transportation assistance for people with limited walking ability who live in the evacuation area. Anyone needing assistance is urged to register online by 10 p.m. Tuesday, Feb. 15, at survey123.arcgis.com/share/4cf3dcfaf66e4b7d9a4acbb844b83db5 or call the established citizens' hotline at 069/212-111. The hotline at the Frankfurt Fire Department can be reached until 6 p.m. on Feb. 15 and from 6 a.m. on Feb. 16. For people affected by Corona in the evacuation area is currently still a housing option and announced promptly.

In the restricted area are also three hotels, a substation and two kindergartens and a school. For those affected by the evacuation who have problems finding accommodation elsewhere, a care center with a Corona-compliant hygiene concept will be set up. For this, as well as other issues, more information will soon be available on the homepage of the Frankfurt Fire Department at feuerwehr-frankfurt.de are available.

A section of the A648 will be closed for several hours in connection with the evacuation and defusing measures. Public transport will also be affected. Details of this will be published by the transport authorities in due time.