Bomb discovery in Niederrad - defusing at the weekend
from FFM Aktuell 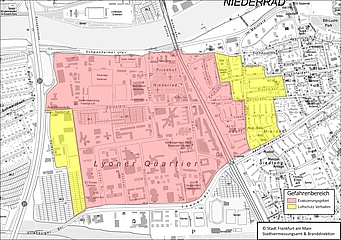 UPDATE: The world war bomb could be successfully defused, the closures and restrictions are lifted as of now (Status: 21.02.2021, 14:30 clock)

Once again, a World War II bomb has been found during construction work. This time it affects the district of Niederrad. Defusing is planned for Sunday, 21.02.2021, as the police, fire department and public order office of the city of Frankfurt announced in a joint press release. The bomb is a 500kg unexploded bomb from the Second World War. It had already been found on Tuesday in the afternoon hours during work in a building pit in Saonestrasse. After the assessment by the Explosive Ordnance Disposal Service of the State of Hesse (RP Darmstadt), the time of defusing and necessary measures were determined by all authorities and organizations involved. Due to the quantity of explosives and the design of the American-type bomb, it is necessary to set up an evacuation area as well as a protection zone, as a detonation would cause massive damage to buildings and a great danger to human life. The Fire Department has created an accurate, interactive map with a search function that anyone can use to check if they are affected. The map can be accessed here: https://t1p.de/lsz3

According to population statistics, the area has 4,500 residents. There are also some special properties such as the Niederrad combined heat and power plant, an underground high-pressure gas pipeline, district heating connections and transformer stations as well as the Niederrad S-Bahn station, railway lines and the 10th police station in the danger zone. Fortunately, nursing homes and hospitals are not affected this time. However, the pandemic situation presents an additional difficulty. Due to the circumstances in this case, the defusing may last until the evening hours. For all residents who cannot find another place to stay, a care centre with an appropriate hygiene concept is currently being sought. More detailed information can be found, as soon as it is available, on the website of the fire department www.feuerwehr-frankfurt.de

Limited-walking persons who live in the evacuation area and need transportation to the care center, or a safe place near the evacuation area, should register as soon as possible, no later than Saturday, 20.02.2021, 16 o'clock, register online at www.feuerwehr-frankfurt.de or report by phone to the citizens' telephone at: 069 / 212 111. The citizens' telephone can be reached from Thursday, 18.02. to Saturday, 20.02., in the time from 8 am to 16 pm and Sunday, 21.02. from 6 am until the end of the operation.

For people affected by Corona in the evacuation area, with a written or verbal pronounced isolation or quarantine order from the health department, the following applies: these will be contacted separately by telephone and picked up at home, cared for in a suitable place and brought back home after completion of all measures. Transportation of those with limited ambulation, as well as those affected by Corona from the evacuation area, will occur beginning at 8 a.m. Sunday. Affected persons are asked to be ready for pickup beginning at that time. Due to the high number of transports expected, pickups are not expected to be completed until around 11 a.m.

There is also a protection zone adjacent to the evacuation area. For these addresses, so-called air-raid precautions apply. This means: from 8 o'clock may not leave apartment, houses or workplaces. Staying in the area of windows, glass doors, terraces and balconies is prohibited. Windows and doors are to be kept closed. All persons living or working within the two areas are also urged to keep themselves actively informed of developments and to pass this on to neighbours or colleagues if necessary. Up-to-date information will be posted at www.feuerwehr-frankfurt.de. The city of Frankfurt, fire department and police also provide information on their Twitter channels: www.twitter.com/Stadt_ffm, www.twitter.com/feuerwehrffm and www.twitter.com/polizei_ffm respectively .