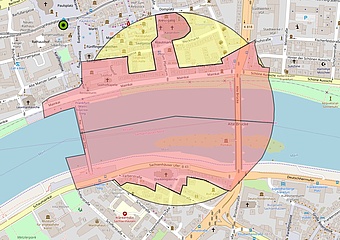 A few days ago, during a diving exercise in the Main River, a 250 kg aerial bomb from World War 2 was discovered. This must now be removed by experts from the explosive ordnance disposal service of the Darmstadt regional council. The bomb is scheduled to be defused on Sunday, April 14. And as usual, for safety reasons, such an action again requires the evacuation of a defined danger zone.

Therefore, on both sides of the Main riverbank, the first rows of houses in a defined area must be evacuated. In the second row of houses, in an area also determined by the Explosive Ordnance Disposal Service, residents are required to observe a special code of conduct. This means that affected residents may remain in the buildings (yellow protection zone). However, they should avoid window areas on the side facing the Main River and keep windows and doors closed. For safety reasons, it is forbidden to stay outside in this area for the duration of the evacuation period. Road and shipping traffic as well as public transport will be impeded by closures around the Old Bridge.

Maps showing the two evacuation zones will be published to visualize the planned evacuation measures.

Red Zone (Evacuation Zone):All residents in this zone must have left their homes as well as this area by 08:00 on Sunday, 14 April 2019. Subsequently, the area will be controlled by the police and the city police.

Yellow zone (protection zone): Here, as described above, the specification of the special behaviors that must be observed on Sunday, 14.04.19 from 09:30 until the release. A care center for those affected by the evacuation will be set up in the Ratskeller of the Römer, Paulsplatz 5, 60311 Frankfurt am Main. Affected residents will also be informed by means of flyers. They are asked to inform their neighbours as well. Furthermore, current radio warnings will be issued.

About the duration of the measures can not yet be given any concrete information. The end of the closures will be announced by radio announcements as well as through the social media channels and the known websites of the Frankfurt Fire Department and the Frankfurt Police.

It can be reached at the following times:

People in need of assistance or who are bedridden and live in the red zone area are asked to call the Citizen's Phone if they need assistance during the evacuation.

Further information is also available on the websites of the fire department and police:

UPDATE: Free admission to DFF for evacuees on Sunday, 14. April

Exhibitions and filmcaf&eacute; open as early as 8am

.In close proximity to the evacuation zone, the DFF - Deutsches Filminstitut & Filmmuseum will open its doors as early as 8 a.m. this morning to provide a place for those affected by the evacuation to stay:

The filmcaf&eacute; will offer hot drinks and snacks for breakfast in the museum foyer - or in the 3rd floor foyer - from 8am. OGs, where visitors can be taken on a big screen into the past 70 years of German film history. The permanent exhibition can also be explored on your own from 8am or, as every Sunday, on a public guided tour at 3pm. Families can see the film version of the classic children's book MOMO (BRD/IT 1986, Director: Johannes Schaaf) in the cinema at 3 pm.