Book boxes in flames: Another fire at the Bockenheim campus
from FFM Aktuell 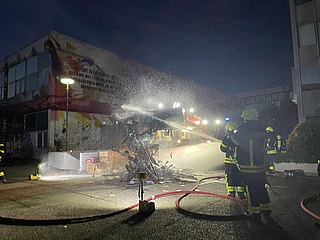 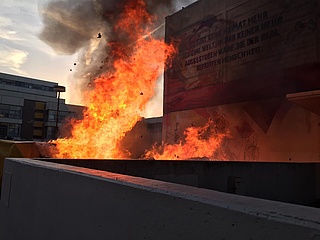 There have already been two fires in the area, and now there was another one on Saturday: In a fire of numerous second-hand books in the Senckenberganlage on the Bockenheim campus, property damage of at least 15,000 euros was caused. The fire brigade arrived at around 9 p.m., but there was already thick smoke over the area and the flames in the courtyard behind the former university canteen were a good 10 metres high. Numerous cardboard boxes with used books had caught fire, as well as wooden parts that presumably belonged to a sales stand. By the enormous heat development also the front of a neighbouring building was affected.

the fire-brigade succeeded in bringing the fire fast under control. More time took, however, the search for ember nests in the about 50 square meters of surface covering, and about two meters high pile. Since water and extinguishing foam could not penetrate deep enough due to the quantity of burnt material, the command decided to use a telescopic loader. With the large shovel this pulled the smoldering paper mountain gradually apart, so that finally with even more extinguishing agent could be prevented that flames formed again and again.

The cause of the fire and possible background is being investigated by the police. Arson is not ruled out, especially since a person was observed by a witness who had knelt behind a stack of books and then quickly moved away from the location. In addition, there had been similar fires in previous months: Already on March 19, 2021, there was a fire of several book boxes in the Bockenheimer Anlage, at the height of house number 133. And in the night from Friday, 14 May 2021, to Saturday, 15 May 2021, a book tent burned down on the Gisele Freund Platz. Here, too, arson is to be assumed. Now it is also being investigated whether there is a crime connection between these fires.

Whoever can provide relevant information in this connection is asked to contact the Frankfurt police at 069-75551599.