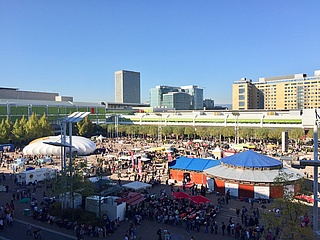 In bright sunshine, many thousands of bookworms came to the Frankfurt Fair again at the weekend to attend the Public Days of the Book Fair. A great programme of readings, signing sessions, interviews, workshops, the big cosplay competition and a Harry Potter world record attempt were on offer. A perfect end to a successful fair: With a 0.8 per cent increase in visitors over the Fair weekend and a slight decline of 1.8 per cent on trade visitor days, the organisers of the 70th Frankfurt Book Fair can be thoroughly satisfied.

The number of trade visitors who travelled to Frankfurt from abroad increased significantly. 285,024 (2017: 286,425) visitors came to the exhibition grounds, a decrease of 0.5 per cent on the previous year. In terms of exhibitors, the Frankfurt Book Fair recorded a slight increase: 7,503 exhibitors from 109 countries took part this year. The Literary Agents & Scouts Centre (LitAg) grew again with 528 tables booked (2017: 500 tables), 795 agents (788) and 337 agencies (321) from 31 countries, including 19 new exhibitors. 3000 visitors attended the conferences and workshops in THE ARTS+ area, 125,000 trade fair guests visited the innovative area in Hall 4.1, and the BOOKFEST events in the Frankfurt Pavilion and in the city attracted 25,000 visitors.

"As the most international event of its kind, the Frankfurt Book Fair is the ideal place to discuss global social issues. We are observing a recognisably growing need for political participation; the desire to determine one's own position and to take part in social discourse is increasing. Discussions on the importance of human rights, flight and migration, populism and civil society engagement dominated the trade fair. On the trade visitor days, the focus was on international book markets and industry trends," said Juergen Boos, Director of the Frankfurt Book Fair.

International attention was paid to the On The Same Page campaign, initiated by the Frankfurt Book Fair together with the German Publishers & Booksellers Association and carried out in cooperation with ARTE/ZDF and DER SPIEGEL, as well as with the support of the United Nations and Amnesty International. The campaign will be further developed in the coming months.

Describing Georgia's Guest of Honour appearance, Juergen Boos, Director of the Frankfurt Book Fair, said, "Georgia's appearance in Frankfurt touched the hearts of Book Fair visitors. A presentation in which the Georgian alphabet is staged with ease and elegance, performances, music, culinary discoveries, readings and, above all, an impressive variety of literary voices. Medea Metreveli's team has put together a brilliant programme, introducing us to Georgia's &sbquo;Characters' and their millennia-old culture in just a few days. Georgia invited us on a voyage of discovery - we were delighted to accept the invitation." After a literary talk with Georgian author Zurab Karumidze and Norwegian author &Aring;sne Seierstad, the guest role was handed over to Norway this afternoon. Musicians Mathias Eick, Kjetil Bjerkestrand and Herborg Kr&aring;kevik from Norway enriched the ceremonial handover with sounds from the far north.

A crowd puller was the new Frankfurt Pavilion, which was opened by German President Frank-Walter Steinmeier. World-class authors made the Frankfurt Book Fair a celebration of literature: Chimamanda Ngozi Adichie set the tone with her impressive speech on hot topics such as migration, racism and women's rights. Over five days of the fair, Paul Beatty, Dmitry Glukhovsky, Ana Kordsaia-Samadishvili, Maja Lunde, Laksmi Pamuntiak, David Sedaris, Nguyen Ngoc Tu, Meg Wolitzer and many other authors delighted their audiences.

What remains at the end are many new exciting book recommendations, through which the waiting time for the next book fair can be perfectly shortened. You can also find more info at: <link http: www.buchmesse.de _blank>Www.buchmesse.de