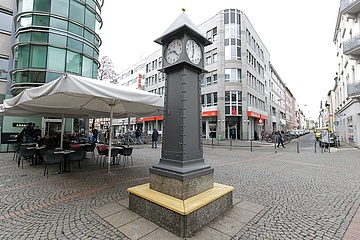 Bornheim without clock tower? Yes, this horrible idea had actually become reality for several weeks. In mid-January, the Department of Culture and Science had had the landmark of Bornheim, which is a listed building, removed. This measure had a good reason, however, because the clock tower urgently needed to be renovated. This has happened in the last few weeks in a workshop in Groß-Umstadt. Here the beloved landmark was worked on by a metal restorer. Shining in fresh splendour, it was then rebuilt in the district on Friday, 14 February.

"For years, the Bornheim landmark was not in a good condition, a renovation was urgently needed. I am therefore all the more pleased that we were able to complete the work after just four weeks and that the popular landmark of Bornheim is now shining in new splendour," says Ina Hartwig, head of the cultural department. To achieve this, the clock tower was first sandblasted and freed from the layers of paint from previous years. In close coordination with the monument office, a new coat of paint was then applied. Also the clock was completely overhauled. Only the plinth and the bench of the tower remained in the district, but also received a beauty treatment: the natural stone was cleaned and the wood of the bench was replaced in order to maintain a uniform appearance. The current measure, which is financed from the budget of the Cultural Office, costs around 39,000 euros. Already at the beginning of 2019, the clock tower was cleared of stickers, adhesive tape and graffiti, but not renovated.

The landmark was probably built in the second decade of the 20th century. Small sources are available for exact dating. Historical photographs show that the clock tower has been renovated and significantly altered over the years. For example, the base construction with bench and natural stone cladding was added between 1970 and 1980 in the course of a conversion and renovation project, and the "gilded sphere" is also not to be seen on older historical photographs.