Breathe a sigh of relief at the Städel: Max Beckmann's painting EISGANG remains in Frankfurt
from FFM Aktuell 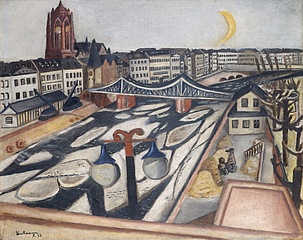 In the course of its systematic provenance research, the Städel Museum in Frankfurt received information from a third party about the encumbered provenance of the work Eisgang (1923) by Max Beckmann (1884-1950). The oil painting, which is listed in the register of nationally valuable cultural assets, shows the characteristic Main panorama of Frankfurt with a view of the Eiserner Steg and was acquired by the Städelscher Museums-Verein in 1994. It turned out that the first owner of the work was Fritz Neuberger, a Jewish textile manufacturer from Frankfurt, who had bought the painting directly from Max Beckmann. Neuberger and his wife Hedwig were persecuted by the Nazis, deported and murdered in eastern Poland. What happened to the painting in detail is, for the most part, impossible to ascertain.

Everything suggests that Eisgang was lost to the Neuberger couple as a result of persecution. After many years of research by the Städel Museum and intensive discussions between the board of the Städelscher Museums-Verein and the heirs, both parties have now reached an amicable "goodwill agreement" in accordance with the Washington Principles on Nazi Looted Art, which represents a fair and equitable solution to the case and will allow the painting to remain in Frankfurt permanently. In addition, a plaque on the painting will commemorate the tragic fate of its previous owner, Fritz Neuberger, and his wife.

Generous financial support for the agreed settlement was provided to the Städelsche Museums-Verein by the Federal Republic of Germany. State Minister for Culture Monika Grütters stated, "The painting Eisgang, created during Beckmann's Frankfurt years, is not only a central work in the oeuvre of this great German Expressionist. Through its depiction of the Eiserner Steg, one of the city's landmarks, this painting is an important, beloved and identity-forming testimony for all people in the Main metropolis and beyond. It is the concern of the Federal Government to contribute to fair and equitable solutions and settlements in the sense of the Washington Principles by supporting such acquisitions. That the Eisgang has now finally found its place in the Städel Museum is a gain not only for Frankfurt, but for the German museum landscape in general."

"We are very pleased that we have been able to reach an amicable and fair solution that preserves Beckmann's Eisgang for the Städel Museum's collection and thus continues to make the painting accessible to the public at the place where it was created. With the agreement that has now been reached, we as the Städel Museum and the Städelscher Museums-Verein want to once again send a clear signal that we, as non-public institutions, also recognize the principles of the Washington Declaration and face up to our responsibility in the face of historical injustice," comments Städel Director Philipp Demandt.

"Max Beckmann's Eisgang is one of those paintings that are particularly popular with the Frankfurt public and play a decisive role in shaping the identity of the Städel Collection. I am all the happier that we have succeeded in ensuring that the painting remains in Frankfurt, the acquisition of which was only made possible by the Städelscher Museums-Verein back in 1994," said Sylvia von Metzler, chairwoman of the Städelscher Museums-Verein.