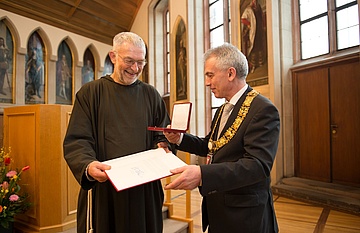 (kus) Lord Mayor Peter Feldmann ceremoniously awarded the Badge of Honor of the City of Frankfurt am Main to Paulus Terwitte - also known by his religious name Brother Paul - on Friday, February 9. The religious and Catholic chaplain is the head of the Capuchin monastery and is known for his commitment to working with the homeless. "You are more than worthy of being awarded the Badge of Honour," Feldmann appreciated Brother Paulus in the Kaisersaal of the Römer. The award is given to personalities who, among other things, have rendered outstanding services to Frankfurt in the social, communal political and cultural fields, thus contributing to the city's higher reputation.

Paulus Terwitte is one of the order's formative personalities. He came to Frankfurt in 1998 as a leader - in the order's language, Guardian. After interruptions, he has held this position again since 2010. The order, with its monastery in the Liebfrauenkirche near the Hauptwache, has a long tradition of working with the homeless in the city. Since 1992 it has run the "Franziskustreff", which offers people on the street breakfast, a place to stay in the warm, social counselling and many practical aids. Brother Paul ran the facility until 2015 and has been the director of the foundation of the same name since 2013. In addition, he has made a name for himself as a chaplain with his media work on social, political, economic and religious issues.

"They raise homeless people's awareness of their own strength. It's not pity that people need, but encouragement," Feldmann said. Civic engagement has made Frankfurt what it is today, he said. There are volunteers in all areas of society, he said. "That's the solidarity of our big city!" said the Lord Mayor, adding, turning to Brother Paul, "Your commitment sharpens our view of this precious social good - togetherness!" "You described Frankfurt in an interview as <x>Ampersand</x>sbquo;socially warm'. I see it the same way."

Feldmann additionally praised the pastoral work of the religious. "Talking to people, about values, about togetherness, that's your vocation. Not only as a confessor, but as a person who experiences the complexity of the big city in the middle of Frankfurt," said the Lord Mayor. In doing so, he referred to the nationwide fame of the honoured: "You, dear Brother Paul, and your deeds have an effect beyond the city limits" said Feldmann. He called on Paulus Terwitte to continue to enrich the city with his work: "Very many people count on you and we count on you!"