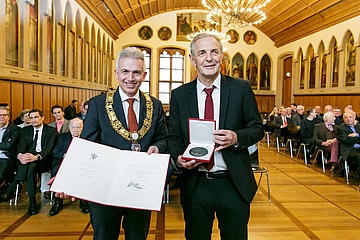 (ffm) "In a staggering 602 Bundesliga games, Karl-Heinz Körbel played for the Frankfurt Eintracht from 1972 to 1991 (and as a hard-hitting central defender often unnerved opposing offensive lines from the first to the last minute). This almost unbelievable number of bets for ‚seine Eintracht‘ makes Körbel most likely to be the undisputed Bundesliga record player for all eternity", praised Eintracht fan and mayor Peter Feldmann the new prize winner.

Actually, Körbel could rest on the successes of his active career and enjoy his retirement. But even after the end of his career, the now 65-year-old Eintracht veteran continues to stand up for his fellow men off the pitch: As the director of the Eintracht Frankfurt Football School, he promotes the up-and-coming footballers of this city and teaches them moral principles. In addition, Körbel is an integral part and leader of the traditional team of Eintracht Frankfurt and has already organized numerous charity matches in this capacity. The restless pensioner has also been on the ball for years as patron of the Frankfurter Rundschau's "Schlappekicker" campaign, which supports athletes and clubs in need through no fault of his own. </Your work is an important contribution to this society, especially in the fast-moving football business, where an injury can make the difference between a contract worth millions and the end of a career, especially in social terms. Because young athletes look up to you and are impressed not only by your sporting successes, but also by your fine moral sense," praised Lord Mayor Peter Feldmann Körbel's services at the presentation of the city's plaque of honour on Monday, 10 February. </The wife of Jürgen Grabowski told me during the last home game against Leipzig in the stadium about the honour. I didn't believe it at first. But that's a cool thing, I have to say," the honored man said when he heard about the upcoming award. In contrast to the numerous sporting awards that Körbel has already received, the badge of honour is something very special, as it highlights his voluntary commitment and his social work. </"I'll help you if I can. This is how I was brought up and this is how I was as a player. So I never had problems with journalists or fans. Because I think they always felt that even when I had a bad day, I gave everything for my club. This feeling was also a very important reason why I stayed with Unanimity," explains the professed Christian. </Körbel emphasizes that it is important to him to pass on to the next generation the ideals and values he received from idols like Fritz Walter. Even though he will receive his pension notice in April, he feels that the urge to do voluntary work has become stronger and stronger over the years and continues to grow. </The football school you founded will celebrate its 20th anniversary next year. So far you have supported the development of around 50,000 children on and off the site. This is not only a huge gain for Frankfurt, but also shows the straightforwardness with which you pursue your goals and projects. On behalf of the city, I would like to thank you very much for this," said the head of the city. Feldmann also stressed that Körbel is one of the few athletes to receive the badge of honour from the City of Frankfurt. This is because it is only awarded to personalities who have rendered outstanding services to the city in the fields of municipal policy, culture, economics, social affairs or urban development and who have contributed to enhancing the reputation of the city of Frankfurt am Main through their work. </Meanwhile, Körbel passed on his thanks by return of post and referred to his "good team", which was a great help to him. It also gives him a lot of energy when young players from the professional squad of Eintracht ask him for advice.</p>