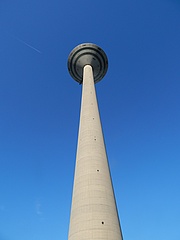 (ffm) In the clean-up session of the budget committee of the German Bundestag on Thursday evening, 14. November, the coalition factions of CDU/CSU and SPD agreed, among other things, on the subsidy of two important projects in Frankfurt am Main.

Mayor Peter Feldmann thanked budget chairman Johannes Kahrs: "His initiative in the committee has ultimately cleared the way. The financial support of the federal government for the renovation of the Paulskirche is highly welcome. At almost 20 million euros, it is of a magnitude that makes it clear that my many talks in Berlin on the national importance of our <x>ampersand</x>sbquo;cradle of democracy' have been heard."

House budget chairman Kahrs had seen each on site in Frankfurt during visits this summer and promised to work for substantial federal participation. "Frankfurt's Paulskirche," Kahrs said, "is a symbol of democracy of national importance and far beyond. Its restoration is in the interest of all of Germany." But this is only a partial step, Kahrs said, towards a democracy place-Paulskirche. "That is why I also supported the mayor's initiative for an &sbquo;House of Democracy' and will also push for federal involvement here," Kahrs stressed.

Mayor Feldmann also thanked Federal President Frank-Walter Steinmeier: "He immediately responded positively to our letters during my first visit to Berlin on the subject of the Paulskirche a year ago and the conversation about our democratic identity history. On quite a few occasions I have spoken with Frank-Walter Steinmeier about the plans, always found great understanding and interest with him."

Feldmann also thanked State Minister of Culture Monika Grütters, to whom he had already appealed for support for the Paulskirche in February of this year, during a visit to the Chancellery. "I agree with her in the effort to enhance the value of the national democratic symbol Paulskirche. She is also a committed supporter of the process."

On the resolved funding for the refurbishment of Frankfurt's Europaturm, the Lord Mayor notes, "Our Europaturm, affectionately known in the vernacular as &sbquo;Ginnheimer Spargel', could offer the highest open viewing opportunity in Germany. The prerequisite for this is redevelopment. I am pleased that the federal government, with funds from cultural promotion and at the request of Deutsche Funkturm GmbH, has decided to finance 50 percent of the costs. In its press release, Deutsche Funkturm GmbH speaks of a marathon, the first step of which was decided yesterday. I agree with this, and I would be pleased if this marathon leads to the goal. We Frankfurters would be happy if it could be opened again for us and the guests of our city."

Johannes Kahrs says: "In Dresden and my hometown Hamburg, we were able to successfully redevelop the radio towers. That is why I was happy to support the application of Funkturm GmbH. During an appointment in Frankfurt I was able to get an idea: Frankfurt's Europaturm is an impressive structure. I would be delighted if it were possible to make the Europaturm accessible to all citizens again."