Burg Schwarzenstein has a new great chef
from FFM Aktuell 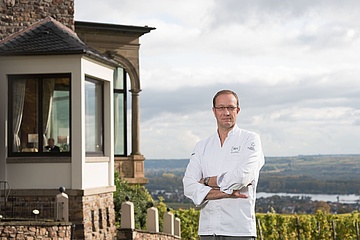 Nils Henkel has long since arrived at the top. Now he is also cooking at the top - on the Johannisberg. And he really fancies the Rheingau, because as head chef of the gourmet restaurant at Burg Schwarzenstein he can realise all the things that are important to him. From February, Henkel, who has earned two Michelin stars, 19 Gault Millau points and many awards, will be spoiling the guests of Burg Schwarzenstein and bringing a breath of fresh air to the Rheingau with new ideas. On the Johannisberg, Henkel finds a perfect stage. The Relais & Ch&acirc;teaux Hotel Burg Schwarzenstein is indisputably among the best the world-famous wine region has to offer.

Nils Henkel took the step to the Rheingau very consciously and after careful consideration. He says: "I am very much looking forward to my new task here in the Rheingau. Burg Schwarzenstein is beautifully situated in the vineyards and offers the perfect setting for my nature-loving cuisine. In addition to fantastic wines, many small producers also come from this region, which will certainly enrich my cuisine."

With his Pure Nature cuisine, Nils Henkel has taken a path all his own. His new German cuisine creates surprises on the palate and on the plate. Inventive and refreshing, he plays with textures and flavours - confidently and always oriented towards the seasons. He draws strength from nature. When he is outdoors and when he is cooking. With sensitive attentiveness, Nils Henkel integrates the treasures that nature and the region give us into his dishes. He pays special attention to wild herbs and old vegetables and often places them at the centre of his menus as the main protagonists. Fish and meat therefore tend to be useful accompaniments in some dishes, although Henkel, who comes from the Baltic coast, has a soft spot for everything that comes out of the water. The refined creations resemble small works of art, in which the inherent taste of the products comes first. Pure pleasure - also for the eye!

At Burg Schwarzenstein, Nils Henkel will build on old successes and put new ideas into practice. With the menus "Fauna" and "Flora", which he creates for the guests at Johannisberg, he remains true to himself and his cooking style. Out of conviction. The menu "Flora" is completely vegetarian, but so delicate and multifaceted that even passionate meat lovers will not miss anything. The menu "Fauna" convinces with the best products from land and water, intelligently combined with the flavours of the world. A non-alcoholic beverage accompaniment of teas, juices and essences matched to the menus is also guaranteed to make you sit up and take notice. A beautiful and innovative addition to the lovingly cultivated wine list, which features Rieslings and Pinot Noirs from the Rheingau as well as numerous international growths.

With excitement, Burg Schwarzenstein's hosts Stephanie and Michael Teigelkamp are also awaiting the new man at their side. Both are convinced that what belongs together now comes together. "Nils Henkel is a brilliant chef and long-time Relais & Ch&acirc;teaux colleague. The fact that he has decided to take over the management of the gourmet restaurant here with us fills us with pride and great joy. With this, we are setting a milestone in the local gastronomy. The whole region will benefit from it - the outstanding vintners as well as our colleagues from the gastronomy", the Teigelkamps say.

From castle to castle

Nils Henkel started his apprenticeship as a cook in 1986 at the Romantikhotel Voss-Haus in Eutin. He then continued his career in the Hamburg restaurants Le Jardin in the Raphael Hotel as well as in the Landhaus Scherrer with Heinz Wehmann and in Il Ristorante. As a sous chef, he went to Münsterland and worked at Coesfeld's Valkenhof with Pascal Levallois and at Averbeck&acute;s Giebelhof in Senden.

The final polish, initially as sous chef, Nils Henkel got from 1997 at the Althoff Schlosshotel Lerbach in the restaurant Dieter Müller, where he took over the position of head chef and Dieter Müller's deputy in 2004. In 2008 he became the sole head chef here. Together with his kitchen team, Nils Henkel led the traditional house into the culinary modern age in the splendour of 2 Michelin stars. After the Althoff Group left Schloss Lerbach at the end of 2014, Henkel worked as a freelancer. He gave cooking seminars, developed recipes and fine products. In addition to his work as an author, he advised catering establishments and companies and was and is a welcome guest at gourmet festivals at home and abroad.

Henkel's list of accolades is long. In 2008, he was Chef of the Month for May in "Der Feinschmecker"" magazine. In 2009, Gault Millau named Henkel Chef of the Year. In 2010, his cookbook "Pure Nature" was published by Fackelträger Verlag, and the readers of Diners Club magazine voted him the most innovative chef. In 2012, the industry magazine "Rolling Pin" named him Chef of the Year as part of its Leaders of the Year Award. Since 2006, Henkel has also been a member of the "Jeunes Restaurateurs", the association of young German top chefs. Now he is coming to Johannisberg to put the Rheingau in the spotlight.