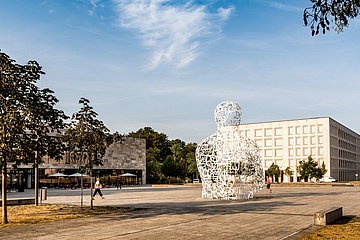 After long planning, the time had finally come on September 16: Since that day, the Westend campus of Goethe University has been further relieved of car traffic. This is achieved in particular by closing the central Theodor-W.-Adorno-Platz to motorized traffic. The northern campus area in the area of the housing estate and the further development stage is now equipped with a barrier. With these measures, the quality of stay on the partly listed area and especially the traffic safety are significantly increased and at the same time specifications of the urban development plan for the Westend campus are implemented.

"Goethe University Frankfurt relies on sustainable mobility and with the concept "car-free campus" on the Westend campus at the same time makes a contribution to increasing traffic safety," emphasized University President Prof. Dr. Birgitta Wolff. "The quality of stay on the university grounds will increase significantly. By placing bollards at specified points, a car-free core zone will be created around Theodor-W.-Adorno-Platz to separate pedestrians and cyclists as well as motorized traffic there," added University Chancellor Dr. Albrecht Fester.

The new traffic concept reduces various traffic problems and potential dangers in the northern campus area. The traffic situation in the residential area there has been criticized for years - also by residents and the responsible local council. Incorrect parking and blocked driveways are the order of the day; access for the fire brigade, emergency services and refuse collection is made difficult, sometimes impossible, as a result. Car traffic on Max-Horkheimer-Straße poses a constant risk of accidents for students who have to cross the street when leaving and entering the seminar building.

With the new building of the Language and Cultural Studies, yet another challenge arises here with a significant increase in pedestrian and bicycle traffic. This situation will be alleviated with the new traffic concept, as only participants with access permission will be allowed to pass through at this point. For cyclists, the streets are still passable.

For the realization of the concept, parts of the delivery for the campus had to be reorganized and the traffic infrastructure had to be improved. In the area of Max-Horkheimer-Strasse, a so-called drop-off point (turning roundabout with short stop option) and two official taxi stands were built. In addition, the traffic flow for the northern campus area, especially the housing estate, will be organized differently by moving two barriers.

The access of the two Christian dormitories, the single-family housing estate, the Philipp Holzmann School and the Leibniz Institute for Educational Research and Educational Information (DIPF) will be regulated via barriers. The Philipp-Holzmann-School gets a new access regulation via Miquelallee into Siolistraße. A new school path on the university campus will further increase safety for students of the two interim schools of the new school campus in the future. In accordance with the traffic concept agreed and approved with the local advisory council and the municipal offices and authorities involved, two barriers were erected: one in Max-Horkheimer-Strasse, the other in Siolistraße. The university operates the barriers and ensures that residents and adjoining residents, but also emergency services, fire brigade and delivery traffic can enter the area.

The implementation was preceded by a lengthy and comprehensive coordination process. While for the closure of the campus square, except for the police and fire department, rather internal university traffic concerns had to be clarified (e.g. student union, event service, postal service, waste disposal, cleaning, etc.), the new traffic concept for the northern campus area was discussed and developed together with the Landesbetrieb Bau und Immobilien Hessen (LBIH), the road traffic office, the city planning office, the city education office and the local advisory council. The university officials would like to thank in particular Axel Kaufmann, the chairman of the responsible local advisory council, who has tirelessly mediated between the concerns of the residents and the university.

Short description of the new traffic concept in the area of the housing estate:

- A barrier will be arranged in Max-Horkheimer-Straße (drop-off point). Access for those authorized to enter will be regulated by Goethecard or gatekeepers.

- Rostocker Straße, along the new building for Language and Cultural Studies (SKW), is part of the car-free university campus and will be closed off from public traffic with bollards in the future.

- Additional cordoning off of the campus area in the northern Siolistraße to Miquelallee will be provided. This will provide separation of university and school traffic flows.