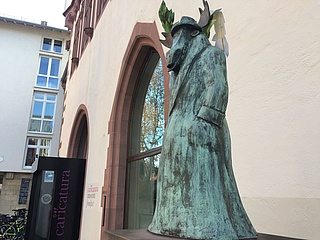 Congratulations: the "most beautiful museum in the world", the Caricatura Museum Frankfurt, Museum für Komische Kunst and the Caricatura Galerie für Komische Kunst in Kassel have been awarded the Hessian Culture Prize 2020. This is really nice news in a year in which cultural venues like these had to (and unfortunately still have to) cope with so much bad news. The two houses will receive the prize for their commitment around the genre of caricature. "The meritorious work has a radiant power that goes far beyond the borders of Hesse," said Minister President Volker Bouffier and Hesse's Minister of Science Angela Dorn, explaining the Board of Trustees' decision in favor of the award winners.

Museum Director Achim Frenz is happy about the award, saying, "We are very honored by the award. The honor once again recognizes the impact and influence of our work on Germany and Europe. The works of our artists show a unique view of past as well as current social and political events and teach the viewer to question things critically." Let's hope that this will soon be possible again directly on site and that the houses will once again be allowed to open their doors to visitors. Because especially in times like these, laughter is incredibly important!

"With numerous exhibitions in Germany, Europe and also on other continents, the Caricatura Museum Frankfurt, Museum für Komische Kunst and the Caricatura Galerie für Komische Kunst in Kassel give artists and thus the diversity of caricature and comedy a stage and a platform that is second to none. They thus show that serious topics can also be approached in a humorous way", emphasized Minister President Bouffier and Minister of Science Angela Dorn. In recent years in particular, however, caricature had also been confronted with confrontations, violence and terror because satire and sarcasm had not been recognised, had been misinterpreted or had been perceived as dishonouring for religious or cultural reasons. "Yet it is precisely the caricature that is one of the symbols of freedom of expression, to show the world, politics and society erroneous actions and supposed weaknesses in an artistic way," Bouffier stressed. "Caricatures have a high expressive power to get to the heart of issues and stimulate discourse. They make an important contribution to the formation of political opinion and will. Recognizing their value as a cultural asset is therefore more important than ever at a time when they are being met with terror and violence elsewhere. The value of this important genre should therefore be recognised and publicly acknowledged by awarding the Hessian Culture Prize to the Caricatura Museum Frankfurt, Museum of Comic Art and the Caricatura Gallery of Comic Art in Kassel", said Bouffier and Dorn. Due to the Corona pandemic, the award ceremony will take place at a later date.

"Particularly in these difficult times, I would like to emphasize that culture in our state is of great importance to the Hesse state government," Bouffier concluded. "The State of Hesse has already helped artists, festivals and cultural institutions to survive the restrictions caused by the Corona pandemic with a comprehensive support package. Now, too, we as the state government are working at all levels and in all ways to ensure that the federal government implements the announced aid quickly and in a practical manner and that the cultural sector, which is once again bearing a large share of the burden of the restrictions, also receives its corresponding share of the compensation. As with our 50-million-euro package from the spring, we will then examine the areas in which there are still deficits and where further supplementary support from the state may be needed. To this end, we are in dialogue with those affected," said Science Minister Dorn.