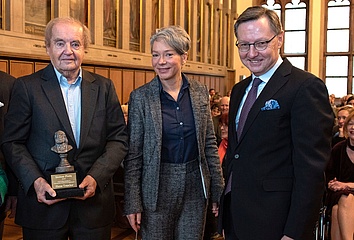 (ffm) Cartoonist, illustrator and author Hans Traxler was awarded the Friedrich Stoltze Prize 2018 on Wednesday, November 21, in the Kaisersaal of Frankfurt's Römer. Traxler, who is one of the co-founders of the New Frankfurt School and co-founded the satirical magazines "pardon" and "Titanic", has been holding up a mirror to society in a humorous way for many decades - just as the Frankfurt freedom poet and satirist Friedrich Stoltze did in his satirical weekly "Frankfurter Latern" in the 19th century. Unlike Stoltze, Hans Traxler is also represented artistically in Frankfurt's cityscape: With the I-monument on the Oberräder Mainufer and with the bronze elk in front of the Caricatura Museum.

The Friedrich Stoltze Prize, which was awarded by the Friends of Frankfurt Association from 1978 to 2016, honors personalities who have made special contributions to Frankfurt and the region. The Giersch Foundation and the Frankfurter Sparkasse Foundation jointly awarded the prize for the first time and endowed it with prize money of 5,000 euros. A jury of seven, including Frankfurt's head of culture Ina Hartwig, representatives of the two foundations and the director of the Johann Christian Senckenberg University Library, which looks after the Stoltze estate, awarded Hans Traxler the Stoltze Prize.

"Hans Traxler is closely associated with Frankfurt and is a master of comic art whose work and impact is equal to that of a Friedrich Stoltze. He has a virtuoso command of both pen and brush and has left his mark on people's memories. A most deserving winner of this year's Stoltze Prize," said Ina Hartwig, Head of the Department of Culture.

Robert Restani, Chairman of the Board of Frankfurter Sparkasse and Deputy Chairman of the Frankfurter Sparkasse Foundation, who also spoke on behalf of the Giersch Foundation on behalf of Senator Carlo Giersch, called Friedrich Stoltze a forefather of the New Frankfurt School and Hans Traxler: "Like Stoltze in his day with his &sbquo;Latern', Hans Traxler illuminates and exposes all-too-human weaknesses, social and political aberrations," Restani said. An assessment that author Eva Demski entertainingly underscored in her laudation of the Stoltze Prize winner