Cast of the comedy RATE YOUR DATE as guests at Frankfurt-Tipp.de
from FFM Aktuell 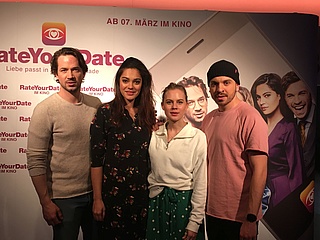 On Friday we were pleased to welcome a friendly visitor to the Frankfurt-Tipp.de editorial office: On the big cinema tour, the quartet of actors of the cinema comedy "Rate your Date" stopped by to talk to us about the shooting, about online dating and also about Frankfurt. In the comedy by David Dietl, Teresa (Alicia von Rittberg) and her best friend Patricia (Nilam Farooq), together with the computer scientist Anton (Marc Benjamin) and his best friend, the computer scientist Anton (Marc Benjamin), develop an online date.) and the latter's best friend, pickup Paul (Edin Hasanovic), a dating app that allows you to assign your date to a certain type, so that future dates know before they even go on a date whether they're dealing with a #nestpicker or a #crazybitch.

Naturally, we were interested to know if the four main characters have had any experience with dating apps themselves. Nilam Farooq finds the concept of a dating app itself exciting, but it wouldn't be for her. Edin Hasanovic takes it even further. "I think for me it would just be too exhausting," he admits. "If you're on a dating app looking at who matched you and why the ones you like yourself didn't, I wouldn't have a good life." But, the actor adds, he understands the fascination with such apps because you get mentally naked much faster under the protection of anonymity.

"But that's exactly the trick of the Internet," says Alicia von Rittberg, "because because of the anonymity you dare to make comments that you probably wouldn't say in real life when you're facing someone." For Marc Benjamin, on the other hand, something else would be the real problem with dating apps: "I would get so perfected in the image I convey on the app that I would have to take off quickly if it came to meeting seriously."

The challenges of getting to know

Quite clearly, as long as you're just texting back and forth, you're just one of many. When you meet, then it becomes binding, Nilam Farooq is convinced. This is a good template for our next question: What was it like when the four of them got to know each other? Did they also put each other in a box at first and did this first impression change in the course of filming? Marc Benjamin is sure: "We're all so polarized that we know we shouldn't immediately pin a hashtag on our foreheads, because a first impression just changes fluidly." And Alicia von Rittberg believes that first impressions are especially difficult in the beginning in a group like this, because you're never really yourself, you have to find your place first. She then tells us about their first encounter, which the director had hoped would be the easiest scene for everyone: "That was the first scene in which all four of us were on the boat (of Paul). But it ended up being the most difficult scene for us to get to know each other, because we had to approach each other as private people, but at the same time we had to find each other in the roles." That's when it was necessary to immediately distinguish between the private person and the role and still function in the group. In this she sees the reason why the first impression was perhaps different than the one they would have of each other now. "That's why I'm enjoying this cinema tour," she reveals to us. "It's nice that we're all meeting in private again now, away from the set."

What was particularly challenging about the roles, we then want to know. Edin Hasanovic reveals that it was particularly exciting to bring the two sides of Paul together in a believable way. "Paul is so loud, fake and opportunistic," Hasanovic says, "but then he finds himself. Transitioning from one to the other, that was the challenge for me." Nilam Farooq then talks about how that went down with, "It was a process that evolved over the course of a shoot. But I actually found it most exciting to shoot a comedy, which I had never done before. I had doubts about that at first because I didn't know what was funny and what would work. But you grow into it over time." Edin Hasanovic agrees, "All four of us, coming from more serious backgrounds, had to learn that sometimes there are moments when you have to relinquish responsibility for the role in order for a gag to work. That's when we had to really push ourselves sometimes to make it work."

To do that, it was also necessary to overcome one's sense of shame, which was already necessary during the very unusual casting. "That was the horror," Alicia von Rittberg tells us with a laugh. "Even before we introduced ourselves to the director and the producer, we were told outside to come in in character, not say hello to anyone and just do it." Then a blind date had to be improvised. Alicia von Rittberg wasn't the only one who was left with a lasting impression from this improv casting. "I had the author sitting at the table with me," says Edin Hasanovic, "and then in the course of the conversation I saw that she was heavily pregnant. That on a first date is a gift for any actor when improvising." Marc Benjamin also remembers that very well, "When I came to the audition, Edin came up to me and he told me the director had been laughing with him the whole time and it had been so great. So I had no pressure at all for my audition," he reveals with a laugh.

For film Frankfurt is super

After the four told us something about the shooting in the summer of the century, which they absolutely enjoyed despite the heat already because of the great shooting locations, we wanted to know finally, whether they know our beautiful city and maybe even have a favorite place here? Edin Hasanovic actually knows Frankfurt a little. He has filmed here several times and is currently shooting again in the Main metropolis. "For film, I think the city is great because it combines two contrasts," he says. "The skyline and the banking district and at the same time also the not so nice sides, that's just great for the camera." However, when he is shooting, he is so busy with work and his role that he has little time to get to know the city better. But one Frankfurt tip does come to mind: I love being on the banks of the Main. It looks really fantastic with the bridges." Alicia von Rittberg has also had a positive Frankfurt experience: "I was in downtown Frankfurt once and was really surprised how beautiful it is there. You wouldn't believe it when you arrive here by train."

After this little excursion from the world of dating apps to Frankfurt, our interview was already over. We would like to thank Alicia von Rittberg, Marc Benjamin, Nilam Farooq, Edin Hasanovic and the team of 20th Century Fox for the nice visit and wish you a lot of fun in the cinema!

You can read our detailed movie review HERE

You can win free tickets to the movie HERE