Charlemagne has his sword back!
from FFM Aktuell 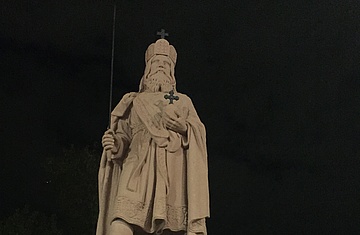 "Kall, mei Droppe", some may have thought at the sight of the statue of "Charlemagne" in the summer of 2020. Some babbsack has stolen Kall's sword. But don't get upset: the sword is back! Yes, the excitement was indeed great when the sword of the replica of Charlemagne, erected in 2016, was stolen a few months ago. But the New Bridge Building Association covered the cost of a new sword, which was returned to its rightful place in time for Charlemagne's Day, which is held every year to commemorate the anniversary of Charlemagne's death. For this, Lord Mayor Peter Feldmann and Head of the Department of Culture Ina Hartwig thanked the New Bridge Building Association - a thank you that we are happy to join.

Mayor Feldmann said on the occasion: "Charlemagne is closely connected with the history of Frankfurt and the history of Europe. The fact that he is now - on Charlemagne's Day - once again completely overlooking the city from the Old Bridge, sword in hand, shows: Frankfurt lies in the heart of Europe and carries Europe in its heart."

In the summer of 2020, the blade of Charlemagne's sword was cut off and stolen by unknown persons on the Old Bridge. With the support of the Cultural Office and the New Bridge Building Association, the sword's blade, originally made of bronze, has now been replaced by a wooden replica.

Cultural Affairs Officer Hartwig explains, "Every day Charlemagne greets passers-by on the Old Bridge, making him one of the best-known monuments and part of the everyday lives of many people in this city. The theft of the sword was a shameful case of vandalism, absolutely unacceptable. It is a testament to Frankfurt and the tradition of its donors that the New Bridge Building Association has agreed to bear the cost of its replacement together with the Cultural Office. For this I would like to express my sincere thanks."

"The New Bridge Building Association is appalled by the theft of the sword, which was paid for with the help of donations from dedicated Frankfurt citizens. In order to continue to help bring Frankfurt's history to life, the association has agreed to replace Charlemagne's sword," said architect and chairman of the Brückenbauverein, Christoph Mäckler.

January 30 was deliberately chosen as the date for the sword's installation, as since 1332 the celebration of Charlemagne's Office has been held on the last Saturday in January to commemorate the anniversary of Charlemagne's death. The unique liturgy with medieval chants has been celebrated since time immemorial only in the Charlemagne city of Aachen and in Frankfurt, where the German emperors were elected in the Middle Ages. The main celebrant and preacher is a different European bishop each year. This year, Bishop Gerhard Feige of Magdeburg is expected to attend.

In 2016, the return of the three-meter-high replica of the emperor to the Old Bridge was financed by the New Bridge Building Association of Frankfurt at a cost of around 110,000 euros, and the cost of the pedestal was covered by the city at the time. The original statue was designed by Karl Eduard Wendelstadt and completed by Johann Nepomuk Zwerger, professor at the Städelsches Kunstinstitut in Frankfurt. This statue stood on the Old Bridge from 1843 to 1914, and when it was rebuilt, the stone ruler was moved to the Historical Museum. After the monument suffered severe damage there during World War II, it was forgotten for a long time.

It was not until 1986 that people remembered, had the statue reconstructed and used it as an eye-catcher in front of the Historical Museum on Römerberg. Since the reconstruction of the head of 1986 deviates in essential points, such as the crown and the beard, from the original, the New Bridge Association had the head of Charlemagne made after a thorough research in various archives. The sandstone figure of Charlemagne, true to the original, was placed on the Old Bridge in the niche - where the bridge cross with briggegickel stood between 1967 and 2013 - facing west, towards France, and thus towards the historic core of Frankfurt.

According to legend, Charlemagne crossed the Main via a ford with the Franks on his flight from the Saxons, thus giving the city its name. Charlemagne - he probably lived from 748 to 814) and King of the Franks was already considered the "Father of Europe" by his contemporaries. Many European nations have their roots in the time of the great Frankish emperor. Charlemagne created important conditions for later developments on German soil. His empire stretched from the North Sea to central Italy, from Hungary to Spain. The Frankish ruler not only created an empire, he also gave it an order, set anchor points for a common religious and cultural identity. He wanted to be ruler not only of the Franks, but of all Roman Christendom. Where he ruled, one faith was also to bind the parts of his European empire together. On Christmas Day in 800, he was crowned emperor in Rome.

The New Bridge Building Association Frankfurt advocates for the concerns of the building culture of the city of Frankfurt am Main by making the built city a topic of public interest. In order to give Frankfurt back a visible piece of its history, the New Bridge Building Association both rebuilt the 1843 statue of Charlemagne on the Old Bridge in 2016 and financed the renovation of the bridge cross. Since the fall of 2018, the Neue Brückenbauverein has been collecting donations for the Langer Franz, Frankfurt's city hall tower. The association's goal is to give back to the city a visible piece of the skyline in close proximity to St. Paul's Church - the spire of the City Hall. The non-profit association has now collected over 186,000 euros in donations with more than 350 individual donations. Thanks to Konrad von Bethmann's generous additional donation-doubling campaign totaling 120,000 euros, a good chunk of the required sum totaling one million euros has already been reached.