Charly's brain comes to the museum
from FFM Aktuell 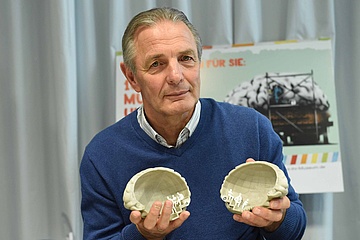 Soccer legend Karl-Heinz Körbel with his head in MRI

Record-breaking Bundesliga player and head of the Eintracht Frankfurt soccer school Karl-Heinz "Charly" Körbel went into the MRI at Bad Soden Hospital today to have his brain scanned for the Senckenberg Gesellschaft für Naturforschung. The scan serves as the basis for the walk-in brain - the highlight exhibit in the "Man" section of the new Senckenberg Natural History Museum, which the non-profit Hertie Foundation is funding with 1 million euros. Last summer, Körbel had clearly prevailed over Albert Einstein, ape researcher Jane Goodall and an unknown Senckenberg fan in the online voting "Whose brain is coming to the new museum".

50 times larger than in reality and explorable on foot - the walk-in brain in the new Senckenberg Nature Museum is intended to fascinate and inform about "Man as a System". But the future visitors will not stroll through some anonymous thinking organ: In an online voting last summer, over 2300 participants decided that Karl-Heinz "Charly" Körbel should be the model for the exhibit. "I feel the choice is a great honor - that will be something very special to be able to walk through your own brain!", says a delighted Karl-Heinz Körbel, Eintracht legend and head of the Eintracht Frankfurt football school.

To have his brain scanned, the Bundeliga record player laid down today in Bad Soden in a magnetic resonance tomograph (MRT) of the clinics of the Main-Taunus district. "The scans will then be used to make a small model in a 3D printer, which will in turn serve as a template for the XXL model," explained Dr. Martin Čepek, Head of Central Museum Development, Senckenberg Gesellschaft für Naturforschung, and continues: "The walk-in brain will be our highlight exhibit in the human section of the Neues Museum."

With 602 games, Körbel holds the record as the player with the most Bundesliga appearances. His greatest achievements are winning the UEFA Cup with Eintracht Frankfurt in 1980 and four DFB Cups. In the process, he had to play with brains: Brain researchers found that playing football demands more from the brain than chess, for example. "At relatively high speeds and in fractions of a second, footballers not only have to control their own movements, but also take into account the positions of their teammates and opponents and calculate the direction and speed of the ball's movement in three-dimensional space - a feat of the brain that no computer, no matter how big, can achieve," adds Prof. Dr. Michael Madeja, neuroscientist and managing director of the non-profit Hertie Foundation.

"It's great that Charly Körbel and Senckenberg have entrusted us with the medical part of the project," says a delighted Dr. Tobias Kaltenbach, managing director of the Main-Taunus-Kreis clinics. The clinics are medical partners of many athletes.

As part of the "Project Senckenberg 2020 - New Museum", the floor space of the Frankfurt Nature Museum will be almost doubled by 2020. This will include the creation of four new exhibition areas: Man, Earth, Cosmos and Future. In the "Man" section, the non-profit Hertie Foundation is funding an exhibition section on the topic of "Man as a System" with 1 million euros, the content of which will be designed and implemented together with Senckenberg. A sum of 56 million euros is required for the major conversion and new construction project, which is being collected via the fundraising campaign under the slogan "Die Welt baut ihr Museum". More at: <link http: www.die-welt-baut-ihr-museum.de _blank>www.die-welt-baut-ihr-museum.de 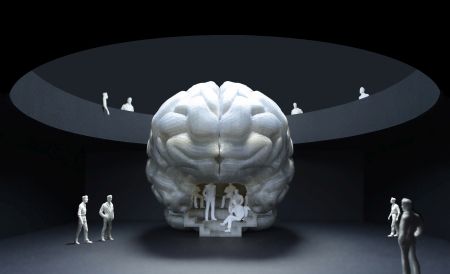