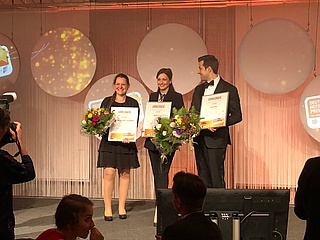 The joy was great at Le M&eacute;ridien Frankfurt - and for good reason. Because Christina De Nardo-Hackenberg (28), Director of Convention Sales at the 300-room hotel managed by Munich Hotel Partners (MHP), took second place in this year's German Hotel Young Talent Award. She can be justifiably proud of this.

The young talent prize is awarded annually by the Hotel Directors Association Germany e.V. (HDV) and the Allgemeine Hotel- und Gastronomie-Zeitung (AHGZ) and aims to promote extraordinary achievements of hotel industry junior managers in the second or third management level up to the age of 33. Christina De Nardo-Hackenberg can now - in addition to the silver title - also look forward to a management training course at the Hotel School The Hague Amsterdam as well as an invitation to the Hotelier of the Year. With her silver placement, she follows the success of Nicole Zientek (née Krauß) from the Frankfurt Marriott Hotel, who won the title in 2018 and is also an employee of the Marriott Group.

Competence, confident appearance as well as genuine passion were rewarded

.To the final elimination, which took place in the context of the HDV spring conference in Bamberg, had previously qualified in two preliminary rounds two other candidates, only one competitor de Nardo-Hackenberg ultimately had to admit defeat: In this year's task - a short presentation on the recruitment of junior staff in the hotel industry - the three finalists had to prove their skills in front of the expert jury as well as the gala audience present. Here, De Nardo-Hackenberg was able to score with ability and convinced with competence, a confident appearance as well as genuine passion for her profession. "We are incredibly proud of Christina," said Wolfgang Selinger, General Manager of Le M&eacute;ridien Frankfurt. "With this great award - even if it didn't quite make it to the top of the winners' podium - she has not only rewarded herself, but also helped us as an employer to great honor. I hope - also on behalf of Munich Hotel Partners, Marriott and the entire hotel team - that she will remain loyal to us for a long time to come with her knowledge, qualifications, exemplary commitment and winning character."

Christina De Nardo-Hackenberg studied International Hotel Management (double bachelor) at the International University Bad Honnef as well as at the International College of Management Sydney (Australia). In parallel, she completed various trainings and traineeships - among others at the City Seasons Hotel Dubai, the Four Seasons Hotel Sydney or the Kempinski Hotel Giardino di Costanza in Sicily (Italy). In 2013, she started her professional career at Le M&eacute;ridien Parkhotel Frankfurt, first as Convention Sales Coordinator, later as Convention Sales Executive. In 2015, a brief stint at PricewaterhouseCoopers as a buyer for MICE services followed, after which she returned to the hotel industry, namely as a Junior Account Manager at Starwood Hotels & Resorts. Since the end of 2016, De Nardo-Hackenberg has been under contract at Le M&eacute;ridien Frankfurt, where she was initially Sales Manager and has been responsible as Director of Convention Sales since the end of 2017. She leads a staff of six and generates annual sales of around 5 million euros in her area.

Le M&eacute;ridien Frankfurt, with 300 rooms and suites, is located in Frankfurt's Bahnhofsviertel, on a leafy city square that is considered a hotspot for the gastro and nightlife scene. The hotel is just a few minutes' walk from the main railway station and the banking and business district, the Museumsufer is within easy walking distance and the airport within 15 minutes by car. "History versus modernity" is the motto of the hotel, which consists of a modern part and a historic palace in neo-Renaissance style. In-location for casual fine dining with smoked and barbecue specialties is The Legacy Bar & Grill. The Giulia Super bar is also located in the same building. For meetings and events, the hotel offers ten function rooms in more than 600 square feet of space. The Le M&eacute;ridien Frankfurt realizes the group-wide art program "Unlock art" through a partnership with the Schirn Kunsthalle, one of Germany's top addresses for contemporary art. Le M&eacute;ridien Frankfurt is managed by Munich Hotel Partners GmbH (MHP).