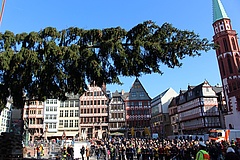 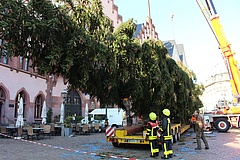 Big excitement yesterday afternoon at the Römer: Thomas Feda, managing director of Tourismus+Congress GmbH, received a call from Bad Orb. The tree, christened "Peter", which the city wanted to donate to the Frankfurt Christmas market, turned out to be unfit for transport. The heat of the summer had affected the tree so badly that its branches would not have survived the transport. It looked as if the date for erecting the tree on the Römerberg, which regularly attracts many onlookers, would have to be cancelled. But in Bad Orb was worked with united forces on a solution and at 17 clock was certain: A replacement tree is felled.

This is not even half as heavy, as "Peter", but otherwise "Peter II" is a worthy replacement. 31 meters high and weighing 4 tons is the spruce, which Bad Orb's mayor Roland Weiß together with citizens from the spa town and a delegation of the theater group "Peter von Orb" handed over to City Councilor Mike Josef. Josef, who accepted the tree on behalf of Lord Mayor Peter Feldmann, praised the efforts of everyone who made it possible for the tree to be erected on time in Frankfurt. Roland Weiß was simply proud of his team and of the fact that Bad Orb has now been allowed to donate a tree for the "most beautiful Christmas market" for the fourth time. And a very relieved Thomas Feda was simply grateful for what was achieved in Bad Orb in such a short time.

All those who are now worried that "Peter I." is now simply disposed of, can be reassured. His trunk will be used to make benches and tables for a "Green Classroom" that will be donated to the Wegscheide school hostel near Bad Orb. Here, children will then have the opportunity to take part in ecological lessons in the open air. Also from "Peter II.", which would have had to be felled anyway like "Peter I.", after the 06.01., when its lights on the Römerberg finally go out, seating furniture for the "Green Classroom" is to be made.

Until then, however, the replacement tree will first be decorated in the coming week with around 4,000 LED lights and bows, after it has been allowed to hang out for a few days. For the first time, "Peter II:" will light up in full splendor on November 25 for the start of the 2019 Frankfurt Christmas Market! We are looking forward to it!