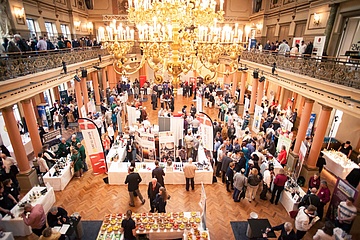 In a few days it will be that time again. Then the CiderWorld'19 Frankfurt Cider Fair, one of the world's largest and most important presentations for wines made from apples, invites you again to the wonderful ambience of the Gesellschaftshaus Palmengarten. As was the case last year, the 2019 fair will once again take place over two days, this time on 30 and 31 March 2019. On Saturday, 30 March, representatives from the trade, gastronomy and the trade press will have the opportunity to get a comprehensive picture of the quality of the new vintage after the presentation of the CiderWorld'19 Awards. The exhibition space for this trade day has been greatly increased compared to last year due to the good response. But don't worry, not only trade visitors will be able to enjoy this event, because on Sunday, 31 March, the exhibition doors will open to all interested visitors. And around 500 products will then be available for them to taste: traditional ciders, sidras and ciders, modern craft ciders, exquisite dessert wines and the finest sparkling wines. This makes the cider heart smile!

The success of the fair is certainly also due to the fact that cider and cider is one of the fastest growing beverage segment worldwide. You can experience the great innovative power of the industry first hand at CiderWorld'19 and of course taste it too! So it's no wonder that the interest of connoisseurs from Frankfurt and all over the world is enormous again this year. The fact that the fair now also has a significant importance for the city is made clear by the fact that Markus Frank, head of the Department of Economic Affairs of the city of Frankfurt am Main, has taken on the patronage of CiderWorld'19 Frankfurt Cider Fair.

Luxembourg Guest of Honour at CiderWorld'19

As in every year, there will again be a guest of honour in 2019: The Mullertal region is the centre of apple growing in the east of Luxembourg. Here, a unique conservation program for the region's orchard meadows has been emerging for several years. The cultivation of scattered orchards, an essential basis for the production of original quality apple wines, is also in danger in this country. This has prompted the organisers of CiderWorld Frankfurt to present this sustainable concept as well as the protagonists and their products at the Frankfurt Cider Fair. The guest country Luxembourg will be hosting a Cider Gourmet Menu at La Fleur restaurant on 30 March 2019. The Luxembourg star chef Lea Linster will serve a menu on this evening together with Andreas Krolik, which will be accompanied by fine wines made from apples. The evening will be hosted by "ciderologist" Gabe Cook from England.

For the program and tickets, visit www.cider-world.com

The debut last year was such a great success that it was clear: The CiderWorld Award will be presented again in 2019. Geisenheim University of Applied Sciences accompanies this award scientifically. In the beverage technology institute of the university under the direction of Prof. Dr. Frank Will, all submitted products are analysed. In a second step, an international jury of experts examines the products from a sensory point of view. The aim of the CiderWorld Award is, on the one hand, to carry out a transparent, high-quality examination of the products and, on the other hand, to draw the attention of the trade and consumers to the high quality of the award-winning products. In addition, producers can use the results of chemical and sensory analysis to further develop their products.

Further information about the CiderWorld'19 Award can also be found at www.cider-world.com

And yet another very special part of the show is being relaunched in 2019: CiderWeek, which precedes the fair! The idea to bring the products of the Frankfurt Cider Fair to the city first ignited three years ago. In various locations around the city, there will again be many tastings, menus and parties around cider, cider, cider & Co. in the run-up to CiderWorld'19 from 21 to 29 March. From traditional cider pubs to trendy restaurants and boutique hotels, the tradition and innovation of wine from apples will be interpreted in different ways.

CiderWeek Frankfurt is calling on tradespeople and private initiatives to take part in CiderWeek. With the goal of making many Frankfurt residents and guests of the city aware of the topic, the organizers want to prepare a stage for as many participants as possible. The offer can range from serving sparkling cider instead of prosecco in a hairdresser's salon to private cider tastings. There are no limits to the imagination. The whole program and tickets can be found at www.cider-week.com