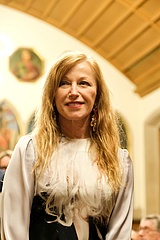 (ffm) Head of the Department of Culture Ina Hartwig awarded the Max Beckmann Prize of the City of Frankfurt to US artist Cindy Sherman on Tuesday, February 12. The award is one of the most important art prizes in Germany. In the Kaisersaal of the Römer, Sherman received the 50,000 euro prize for her life's work in front of around 250 invited guests from politics, culture and society and then signed the city's Golden Book. Cindy Sherman, born on January 19, 1954, is a key figure in conceptual photography. In her work, she negotiates the representation of women in a society driven by consumerism and media technology and questions traditional, primarily male-dominated visual habits and an often voyeuristic view of women.

Director of Cultural Affairs Hartwig thanked the members of the Board of Trustees for their outstanding decision: "The jury's choice to award the Max Beckmann Prize to the American artist Cindy Sherman is not only a tribute to her work, which is groundbreaking in its visual language, but it also means maintaining the connection from Europe to America. Cindy Sherman comes to us from New York, Max Beckmann had to leave the Old World to find permanent exile in this very megacity after the Second World War. As an artist, he laid the foundation for Frankfurt as a city of the arts beyond its borders. This award ceremony is at the same time a commitment to the traditional German-American friendship and community of values in these politically difficult times - a community of values that includes not only freedom of expression, but also, across all barriers, freedom of the arts."

The laudatory speech was given by art critic and feature editor of the Frankfurter Allgemeine Sonntagszeitung Kolja Reichert, who characterized Sherman's work and impact in his speech: "Cindy Sherman has not only made fun of culture. She changed it. She has given us the antidote to everything false, to all misleading illusions, to manipulation through images, to the objectification of the female body, to the intimidation of luxury, wealth and glamour. She confuses us with her enigmatic images, in which the most enigmatic thing is that nothing is enigmatic in them, because everything is openly there," Reichert said. "That's the threat her paintings pose: they're like runs from which the familiar world could unravel."

Cindy Sherman spoke to the guests and the assembled Board of Trustees in the Kaisersaal afterward, expressing her gratitude for the City of Frankfurt's award on the day of Max Beckmann's birthday: "It's a great honor for me to be here and to be able to accept the prize. Max Beckmann had a great influence on me and my work! Congratulations Max Beckmann."

Max Beckmann, who worked as an artist and teacher at the Städelschule from 1925 to 1933, is one of the most important painters of the 20th century. In his honour, the city established the prize named after him in 1976, which is awarded every three years. With the prize, the city honours outstanding achievements in the fields of painting, graphic art, sculpture and architecture. The decision to award the prize was made by a ten-member board of trustees, chaired by Lord Mayor Peter Feldmann and including Ina Hartwig, Head of the Department of Culture, Nina Teufel, Chairwoman of the Cultural Committee, Stephan Siegler, Head of the City Council, Städel Director Philipp Demandt, the Director of the Frankfurt Kunstverein Franziska Nori, and this year the artist and Deputy Director of the Städelschule Judith Hopf, the artist Tobias Rehberger, the architect Peter Cachola Schmal, and the art critic Niklas Maak. The award has been presented a total of fourteen times since 1978. After Maria Lassnig, Barbara Klemm and Agn&egrave;s Varda, Cindy Sherman is only the fourth female laureate. Further information at Https://www.fkv.de/press/max-beckmann-preis