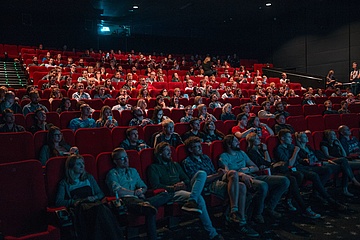 For far too long, the curtains in Germany's movie theaters have remained closed and the screens dark. If the five cinema and distribution associations have their way, that should change by July 1 at the latest. The nationwide opening of movie theatres is planned for this date - regardless of the patchwork of different opening dates and requirements in the individual federal states. In view of this recommended date, the associations appeal to the federal states to allow cinemas to open on this date and to communicate this promptly. This is because cinema operators and film distributors need a certain amount of time to plan ahead in order to restart operations in the cinemas and the supply of new films. And when things get going again, film fans should be lured back into the cinemas with as wide a variety of films as possible. Currently, distributors and cinemas are working on attractive programs to give people a special movie experience again as well as another piece of normalcy.

In the pipeline are potential blockbusters like "Godzilla vs. Kong", "A Quiet Place 2" or "Black Widow", but also arthouse cinema highlights like "The Rush" or the Oscar winner "Nomadland". But even an attractive programme is of little help if cinemas cannot operate economically and with a certain degree of planning security. As a nationally functioning market, it is crucial for the cinema industry that the federal states agree on a date that is as uniform and resilient as possible. Only if all cinemas nationwide have the chance to open together promptly will distributors be able to launch new films at all and thus restore the economic basis of the cinemas. At the same time, the question of the conditions for opening is just as important to the cinemas as the date itself. The associations therefore also agree that the opening of cinemas requires a sense of proportion: This includes that there must be no mask obligation at the place. With reference to the industry's tried and tested hygiene and safety concepts, the associations plead for the cinemas to be given a concrete planning perspective in this respect as quickly as possible. This is the only way to mitigate the enormous damage and the continuing economic threat to the cinema industry.

Other European countries are leading the way: Austria has reopened its movie theaters across the country since the day before yesterday after several weeks of advance notice. France also announced the opening of cinemas the day before yesterday not only just under a month in advance, but also stipulated that cinemas will be allowed to play at 100% capacity again from 30 June.

The first film releases have already been scheduled for the planned opening by 1 July. The associations therefore hope that the federal states will now set the course in the context of vaccination progress and falling infection figures to ensure that cinemas receive reliable framework conditions across the board on the release date. The recommendation is based on the economic needs of the cinema industry. However, each cinema can of course open earlier in coordination with the local conditions.

When it actually starts again in the Frankfurt cinemas, we will of course keep you informed!

A selection of the potential cinema reboots in the opening phase

- Peter Rabbit 2 - A Rabbit Gets Away

- Fabian or Going to the Dogs (Berlinale winner)