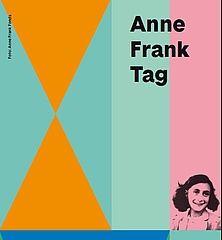 Mayor Peter Feldmann: "I am thrilled by the programme, which was largely put together by my friend and director of the Anne Frank Education Centre, Meron Mendel. In this way, Frankfurt is taking the fate of one of its most famous daughters as an opportunity to enter into conversation with one another. As a young person, I was very moved by the diary because, as I know today, it gave me the opportunity to identify with her fate. What a great writer Anne Frank would have been, this question still moves many people - including me - today. Anne Frank's fate and her struggle for self-awareness and self-assertion simultaneously points us to the immeasurable loss to which the Nazi crimes led. Our lesson? Never again Nazism and exclusion, stay vigilant together!"

"With Anne Frank Day, the City of Frankfurt wants to remember Anne Frank and put the message of her world-famous diary at the centre of commemoration and engagement," explained City Councillor Sylvia Weber, Head of the Department for Integration and Education, the aim of Anne Frank Day. "With events throughout the city, at various locations and in public spaces, we want to reach as many Frankfurt citizens and as many age groups as possible." The aim is also to address current forms of anti-Semitism, racism and misanthropy and to deal with them, Weber said. "In doing so, we must not forget that millions of people are once again fleeing today - including many children and young people."

"Anne Frank is more than a symbolic figure for the victims of National Socialism. Her diary is a document of the individual desire for freedom and self-determination and is therefore everlasting. With her struggle to find her own way of life in murderous times, she still speaks to people of all generations and backgrounds today. The diverse events of Anne Frank Day commemorate her historical fate and at the same time invite people to discuss her impact and the topicality of her ideas for a more humane and just world," explains Head of Culture Ina Hartwig.

As part of a specialist advisory committee, several city institutions and associations have put together a diverse programme for the first Anne Frank Day.

On the evening before, the mono opera "The Diary of Anne Frank" by Grigori Frid will kick things off at Atelierfrankfurt. On June 12 itself, the Westend Synagogue will open its doors to visitors, there will be an advanced training course on the biographies of murdered Frankfurt Jews and a guided tour of the city in the footsteps of Anne Frank. The award ceremony of the nationwide comic competition "Saving the World" and the art actions for the public space "corrections" are likely to appeal particularly to young people. Finally, a prominent panel "Anne Frank: Icon, Inspiration - Means to an End?" will address the thoroughly critical questions about the popular appropriation of Anne Frank as the "most famous victim of the Shoa".

The impetus for an Anne Frank Day in Frankfurt was given last year by Meron Mendel, director of the Bildungsstätte Anne Frank: "The establishment of Anne Frank Day is a very important concern for me and the Bildungsstätte Anne Frank, in order to remember the history of hatred of Jews, persecution and extermination under National Socialism in Frankfurt, where Anne Frank was born and her ancestors lived for a long time, and also to deal with current issues of coexistence in urban society," said Mendel. "In our experience, the active appropriation of history can succeed well when it is linked to the realities of life for people in our society today. At the same time, the story of Anne Frank offers a unique approach to dealing with current forms of misanthropy. Commemorating and engaging - these goals are already being implemented very successfully with the day's diverse programme."

From now on, Anne Frank Day will take place every year on Anne Frank's birthday, 12 June, and will have a new motto each time. This year's Anne Frank Day motto comes from Anne Frank herself, "How glorious it is that no one need wait a minute to start slowly changing the world!" It's a quote from a short story by the then 14-year-old. "We want to read this quote today as a call to all of us to work for a better and fairer world," said Sylvia Weber. "With Anne Frank Day, Frankfurt is sending an important signal for a cosmopolitan urban society that clearly rejects anti-Semitism, racism and discrimination of any kind."

. In addition to the Department for Integration and Education and the Anne Frank Educational Institution, the advisory board included representatives from the Department of Culture, the Office for Multicultural Affairs (AmkA), the City Education Authority, the German Trade Union Federation (DGB), the Protestant Church, the Frankfurt Youth Ring, the Fritz Bauer Institute, the Jewish Community, the Jewish Museum, the Catholic Church and the Council of Religions.

You can also get more info at: <link http: www.bs-anne-frank.de annefranktagffm>