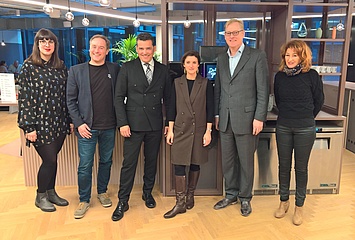 For those who don't (yet) have their own office in the city, but only want to work on projects with colleagues or partners for a certain period of time, so-called crowdworking spaces are a really good alternative. Such an offer is provided by the US startup WeWork, which opened its first spaces in the financial metropolis of Frankfurt in December 2017. Now, Head of the Department of Economics Markus Frank has paid a visit to the premises in Neue Rothhofstraße/Goetheplatz and got an idea of the innovative offer.

In total, the space offers space for 1200 people in rooms of different sizes. The tour of the coworking space was led by Wybo Wijnbergen (General Manager, Northern Europe) and Elisabeth Rollin (Director of Community). Councillor Frank and Oliver Schwebel, Managing Director of Wirtschaftsförderung Frankfurt GmbH, were impressed by the size and speed of the startup's growth. "We are excited about WeWork's new offering in our city. The startup scene in Frankfurt is growing rapidly. In the course of the Global Startup Ecosystem Report survey in 2017, Frankfurt was ranked among the top 50 startup locations in the world for the first time - alongside other locations such as Silicon Valley or New York," Frank explains with satisfaction.

In addition to the location at Goetheplatz, another location is planned. In mid/end 2018, an additional 1200 spaces are to be created in the new Kaufhof building "UpperZeil". "WeWork is among the largest providers on site and gives new ways of working more attention. Property owners need to be more responsive and create flexible office spaces", says Councillor Frank. Founded in 2010 by Adam Neumann and Miguel McKelvey, the company is already present in more than 65 cities with over 200 locations worldwide and has more than 200,000 members.

Markus Frank explains, "We have been following WeWork's rapid rise in the market for some time and are pleased to welcome the company to Frankfurt." The topics of coworking in general, new ways of working, and the demand for flexible office space and desk workstations are picking up steam in Frankfurt and driving more providers into the market.