City Cycling 2018 - Saddle up and win
from FFM Aktuell 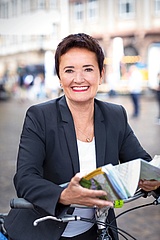 (ffm) The weather is like a painting, bicycles are available in abundance and the beach figure for the summer vacation wants to be trained. In addition, everyone should make a contribution to climate protection. Want more reasons to switch to a bike? Here you go: In the "Stadtradeln" campaign, you can live out your sporting ambition and win attractive prizes to boot.

"Stadtradeln" is the largest international cycling campaign, initiated by the Climate Alliance. So far, 780 municipalities have registered for 2018, including Frankfurt. The principle is simple: teams are formed in the municipalities, which add up their cycled kilometres over three weeks and enter them on the Internet at Http://www.stadtradeln.de . Prizes will be awarded, among others, to the most cycling-active district and the team with the most kilometres cycled per person. For schools there is a separate competition, the school cycling.

Umweltdezernentin Rosemarie Heilig and Verkehrsdezernent Klaus Oesterling call for participation: "Get on your bike and cycle with us. Every kilometre counts". The campaign starts in Frankfurt on 3 June, but you can register now. The campaign will run until 23 June. Anyone who lives, works, studies or goes to school in Frankfurt can take part. Municipal employees can participate in parallel in the municipal campaign "By bike to work".

The most active municipalities will be awarded by the Climate Alliance. For example, there are bicycle bags - and lights, locks, helmets, T-shirts and much more to win