CITY OF CHILDREN - 2018 campaign was presented
from FFM Aktuell 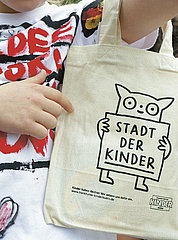 It is incredibly important for our children to learn that they have rights and what they are. Not everywhere in the world are children's rights respected - we in Germany are in the fortunate position that rights do not have to be fought for again and again. Nevertheless, educational work is also important in this country. What are my rights? How can I enforce them? Who can I turn to if I have questions? The great campaign STADT DER KINDER, initiated by the Frankfurt Children's Office, is intended to help. This year it will take place over five days from 28 May to 1 June, International Children's Day. Last Thursday, Mayor Peter Feldmann and Sylvia Weber, Head of the Department for Integration and Education, presented the extensive programme of events at the Institute for Urban History. Compared to last year, the more extensive and varied offer is open to 8000 girls and boys free of charge. Every year, the campaign educates about different parts of the UN Convention on the Rights of the Child. In 2018, the focus is on Article 13 (freedom of expression) and Article 17 (right to information).

A total of 106 actions are offered in 37 Frankfurt districts. In the previous year, there were 64 in 34 districts. This is a significant increase, which is due to the great commitment of the Children's Office and the participating partners. The children can expect theatre performances, concerts, art exhibitions, visits to radio and television, workshops, discussions, rap courses and other activities. The organisers are after-school clubs, associations, youth centres, schools, several municipal museums, libraries and the children's representatives in the city districts. While 21 events are open to everyone, there are also numerous activities for which pre-registration (for individuals or groups) is necessary. Around 40 actions are also only open to children of the participating institutions, e.g. in school libraries or from Kita Frankfurt.

A special highlight is the "Concert of Favourite Books" on 30 May, which the Lord Mayor will open in person. At this concert, the band Rumpelstil - known from the Flashlight Concerts - will celebrate the special relationship between books and people with much wit and tempo. All the events are listed by district in a 140-page brochure. It is sent to numerous public institutions for children and young people. On the Internet, the program can be found at Http://www.frankfurt-mein-zuhause.de .

Mayor Feldmann presented the brochure saying, "We want Frankfurt's children to have a lot of fun with the campaign - and to become aware of their rights. We want them to speak their mind and get involved in what is happening in their district and in their city. We want them to feel comfortable in our city. Because Frankfurt is a city of children!"

The Institute for Urban History was deliberately chosen to present the program. With its event "Fight for your ideas! School Newspapers in the Archive", it put the spotlight on young people's right to express their opinions on the day of the presentation. Project coordinator Manuela Murmann introduced the event, which allows 10 to 14-year-olds to take a look at old school newspapers that are kept there - and some of which were on display at the press conference. At this event, students can explore how their peers used to live, articulate their opinions, and what they fought for or against. The event will be held on May 29.

For the event program, visit