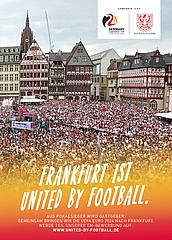 When the decision is made on 27 September whether the 2024 European Championship will be held in Germany or Turkey, it will also mean a decision on whether Frankfurt will play or not. In the event that Germany wins the bid, the Main metropolis will be one of ten cities to host the tournament. And of course, the advertising drum is already being beaten vigorously. Following the appointment of Fredi Bobic as the city's European Championship ambassador at the beginning of June, the city of Frankfurt am Main is now following suit and launching its advertising campaign for UEFA EURO 2024.

Sports Director Markus Frank has presented the advertising campaign and says: "Our European Championship bid stands for diversity and togetherness. A tournament for everyone! This is exactly what we are now advertising on our streets, where life pulsates and people meet. Our motifs show our city as it is - as a warm, experienced and sport-loving host."

Currently, street bridge banners in the EM design "Frankfurt is united by Football" are hanging throughout the city. This first advertising measure will be followed by advertisements on buses, trains and in stations with photo motifs of the cup celebrations - the perfect example of how warmly and cheerfully Frankfurt can celebrate football. In addition, a joint roadshow with the DFB is planned for July and August.

All that remains now is to keep our fingers crossed that the European Football Association (UEFA) will decide in favour of Germany on 27 September, so that we can once again prove ourselves as warm, cosmopolitan hosts in 2024. For more information on the UEFA EURO 2024 bid, visit the campaign website at: <link http: www.united-by-football.de _blank>Http://www.united-by-football.de