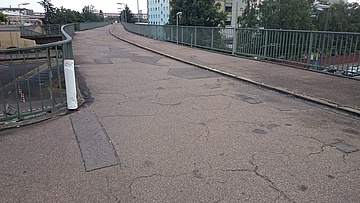 (ffm) The city of Frankfurt has found serious damage to the Cassellabrücke bridge in the Fechenheim district during routine inspections: Therefore, the pedestrian and bicycle crossing is closed with immediate effect until further notice.

Even though the structure, which dates back to 1964, had not been in good condition for years, traffic safety was ensured at all times. At the level of Hanauer Landstraße, the Office for Road Construction and Development (ASE) had provisionally reinforced the supporting structure of the bridge, thus ensuring its operation. However, recent investigations by the ASE now revealed that, for example, isolated cracks in the structure had widened considerably. A closure thus became unavoidable.

The Cassella Bridge is around 520 metres long and spans the Allessa company premises. It directly connects the southern part of Fechenheim with Hanauer Landstrasse. With the removal of the bridge, it is now necessary to switch to detour routes.

The city of Frankfurt will inform promptly about the next steps.