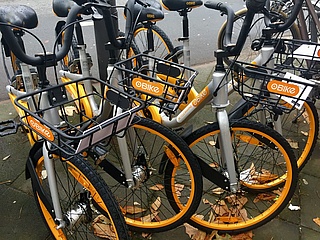 After several providers of rental bikes offered their service in Frankfurt at once, the somewhat oversaturated market has begun to regulate itself. The provider o-bike is the first whose bikes will disappear from the cityscape again. The city of Frankfurt has already begun collecting o-bike's yellow bikes. "We have asked o-bike several times with deadlines to make a statement to the city," said Klaus Oesterling, head of the transport department. "o-bike has let all deadlines pass without showing any reaction." There are currently no signs of life from o-bike and no contact person. Thus, o-bike has continuously violated the rules formulated by the city for rental bike providers. It is unclear what influence the bankruptcy of o-bike's parent company in Singapore has on its activities in Germany. Apparently, however, o-bike is still operating in some countries.

Because of this lack of clarity, the public order office will collect the bikes using the same system that is used to collect defective and presumably abandoned bikes elsewhere in Frankfurt: The bike will first be marked with a yellow banderole asking the owner to collect the bike within seven days. If there is no response, the bike will be collected and temporarily stored after this period.

Oesterling expressed the assessment that there are relatively few bikes to be collected in the city centre. In the outer districts, on the other hand, there were still many o-bike bicycles in side streets and green spaces. Since the collection there is relatively time-consuming, it will take some time until the last o-bike is collected.

After completion of the campaign, the city will try to charge the costs to o-bike, provided that the city finds an addressee. If not, he said, the city would auction off the bikes or give them away to charitable organizations. However, the cost of removing the locking mechanism would likely exceed the material value.