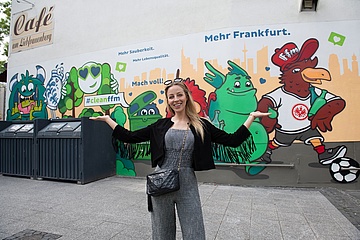 A new graffiti adorns the wall at Kleinmarkthalle. So far this is nothing special. The whole thing is worth reporting because the mural has a special purpose: The support of the campaign #cleanffm! So now a bottle-eating green monster and other friendly colorful companions advertise for more cleanliness. The colorful graffiti on the wall is symbolically meant to help keep the square in front of Frankfurt's municipal market hall clean. Responsible for the appearance of the anti-garbage monster is Frankfurt-based illustrator and influencer Laura Kroschewski, aka Laura Dajana, who sprayed the new graffiti in just three days. With her monsters and colorful figures, she wants to support the #cleanffm campaign against vandalism, graffiti and careless discarding of packaging waste.

"I am a Frankfurter myself. And I love my city. That's why it's important to me to do my part to make sure my city is clean," says the artist. The graffiti project is therefore a special affair of the heart for her. What else Laura Kroschewski has to say about Frankfurt and #cleanffm can soon be seen in one of the new Mehr Frankfurt films. With this she joins the already successful line-up with Peter Fischer, Maja Wolff, Henni Nachtsheim and many others. They all advertise together in the clips for more cleanliness and quality of life in our city.

#cleanffm is a campaign of the city of Frankfurt, was launched in June 2017 and stands for more cleanliness, more quality of life and more Frankfurt. With #cleanffm, the city has set itself the goal of achieving a long-term rethink among the Frankfurt population with regard to waste behaviour. #cleanffm thrives on the participation of Frankfurt's citizens and invites everyone to become part of #cleanffm. Because anyone can take part.