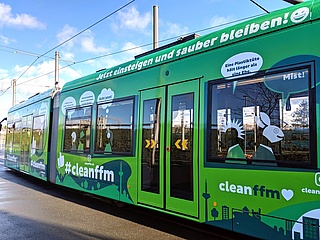 Join in, participate and make a contribution to a clean Frankfurt - this is the motto under which the city's #cleanffm cleanliness campaign is entering a new phase: From now on, the #cleanffm tram will be advertising for a clean Frankfurt and for an awareness of waste avoidance. The tram, which has now been presented, really catches the eye immediately: The Frankfurt skyline in the foreground, many humorous dialogues on various cleanliness topics and held in the typical green of the Frankfurt cleanliness campaign #cleanffm - this tram is a real eye-catcher, which has what it takes to increase the attention for this campaign even more.</With the new #cleanffm tram, we want to specifically advertise for more cleanliness in the city area and call on everyone to join in," said Frankfurt's Environment Department Director Rosemarie Heilig on Monday, 10 February, during the official presentation of the #cleanffm tram. And taking part is really necessary, because every year 11,500 tons of garbage accumulate in public streets, only 1900 tons of which end up in the garbage cans. A nuisance for street cleaners, but also for all those who want a clean Frankfurt and dispose of their rubbish properly. </Carelessly discarded to-go packaging, cigarette butts and pizza boxes do not belong in our parks, green spaces or on the streets. They belong in the trash cans," said Heilig. There are a total of 7000 rubbish bins in the city, 1000 of which have been added since the start of the #cleanffm campaign, Heilig continued. </p>

"Our #cleanffm tram has been on the road in the city for a few weeks now and I am already being approached about it. With her, our #cleanffm campaign is now even more present in the city. The tram travels through the streets of the city, is used on various VGF lines and is therefore seen by many people in the districts. The more they see, the more they'll share our idea of a clean city, I'm sure." </You can also read more about the campaign under <a href="http://www.cleanffm.de/home" target="_blank" rel="noopener">www.cleanffm.de/home