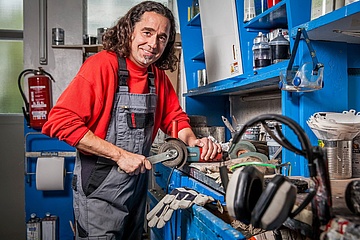 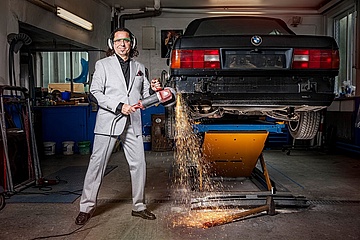 Görner's fashion - that's where the spark comes from

Jewelry looks it says his mother - and as a trained seamstress, she must know! The light grey tailor-made suit with black sleeve patches fits like a glove, the initials in the lining of the jacket and a black polo shirt made to measure.

Normally Ralph Sallwey (50) wears blue overalls, safety goggles and ear protection. He is a coachbuilder and painter. He, his two employees and the apprentice work on 30 cars a month. Axle measurement, tyre service, dent removal, flexing, painting and polishing as well as the complete range of car preparation are among his tasks. The business in Dreieich-Sprendlingen has been in existence for 80 years. Sallwey took it over in the third generation, became a master craftsman in 1991 and runs the workshop with his partner.

The most unusual job was painting a coffin Sallwey recalls. "This had to be done overnight, in mother-of-pearl white the relatives wanted the final resting place for the deceased". But the various motifs he has painted on radiator hoods or helmets can also be seen. Among them snakes, Jack Daniels bottles or discreetly dressed women.

The body builder and painter is the October motif of the campaign Kleider machen Leute. Stephan Görner and Sven Müller are the initiators and want to honor occupational groups and the people behind them with the photos of Nikita Kulikov. "The sensation is completely different when a man in a pinstripe suit or in a blue overalls faces you. This is one and the same person. Therefore, the respect and appreciation of his performance at work should also be the same - whether in fine threads or in a mechanic's suit, says Görner.

At the end of the year, a calendar is created on which all twelve occupational groups are depicted. This will be handed out at the "lighthouse project" of Görner and Müller, the charity gala Kleider machen Leute, which will take place on 12 November at the Hotel Kempinski, under the patronage of Prime Minister Volker Bouffier. Evren Gezer will host the elegant evening. Star guest is Paul Potts. Five well-known personalities such as weatherman Thomas Ranft, celebrity chef Amador, NDW singer Markus Mörl, ex-national goalkeeper Uli Stein and the first female celebrity - presenter Rabea Shif will present Stephan Görner's fashion on this evening. The Leberecht Foundation will again receive the proceeds from the raffle and donations. Last year, an amount of 20,000 euros was collected, which was used to support the Association of the Deaf of the State of Hesse. "The gala went down great last year," says event expert Sven Müller happily. "This year we were able to sell another 20% more tickets, are now sold out except for a few remaining tickets. But this is no miracle, because here the price performance ratio is correct. In the 195 euro entrance fee are 3-course candlelight menu, champagne reception and exquisite wines included.