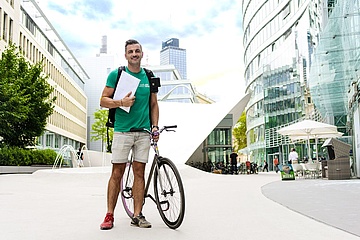 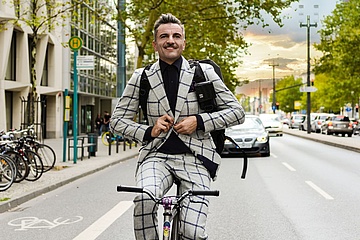 When things have to move fast and the city is full of cars that are slow to make their way through the tough traffic, Andreas Kubowitsch (38J) is a man in demand. The self-employed bicycle courier from the station district uses his bicycle to deliver letters, parcels and packages to recipients in Frankfurt and Offenbach. For environmental reasons, he relies on his bicycle, which can carry loads of up to 100 kilos on a support surface. In the office of the "Green Courier", too, everything works digitally, without paper, in order to protect the environment here as well. On average, he makes 14 deliveries a day and cycles about 80 to 120 kilometres in wind, rain, snow or blazing sun. During the hot spell, it was particularly exhausting for the trained tourism expert. Kubowitsch had to drink six litres of water and the occasional apple spritzer to balance his fluid requirements.

Unusually, the bicycle courier still likes to ride his racing bike on weekends, play football and tennis or go to the gym in his spare time. Unusual also his trademark: Andreas Kubowitsch wears two different shoes every day. Stephan Görner and Sven Müller are curious to see whether the bicycle courier will also wear the sneakers at the fourth "Clothes make the man" charity gala on November 10 at the Hotel Kempinski Frankfurt. These would fit conditionally to the chic alpaca tailor suit, which tailor Görner for the photo shooting by Daniel Baldus on the occasion of the campaign on the body tailored. Kubowitsch is one of twelve amateur models with unusual professions who are first photographed authentically at their workplace and then in their tailor-made suit or costume. Recognition, appreciation and respect is the message of the likeable campaign.

More info on the campaign can also be found at: Www.kleider-machen-leute.net