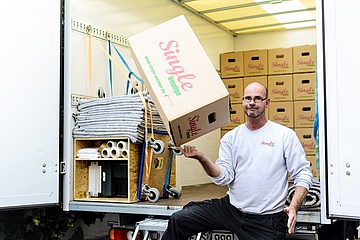 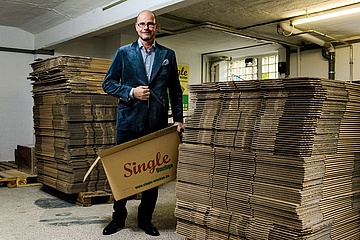 Timo Höhl (52) is used to hard and exhausting work. He and his colleagues haul furniture, cupboard walls, washing machines and dishwashers from the ground floor to the fifth floor in some cases. The removals consultant masters about 40 removals a month, coordinating, dividing up and packing himself. Large, extremely heavy and bulky items are transported to the apartments by means of an external lift. Since 2015, the trained roofer has been working for the company <link https: www.frankfurt-tipp.de ffm-aktuell s ugc ein-partner-fuer-singles-single-umzuege.html _blank>Single Umzüge in Frankfurt Sachsenhausen. But not only single people use his services, also companies or families use the service and the hardworking hands of the eleven employees. Actually, the company is mainly active in the Rhine-Main area, but when a celebrity chef moves from Frankfurt to Vienna, Timo Höhl also likes to accompany the emigrant. "I had to smile at a well-known TV presenter who alone needed fifteen boxes of clothes full of high-quality costumes for her move," says Höhl. Höhl experienced first-hand what it's like to be in the limelight for even a brief moment. The pageant consultant was dressed in a chic, dark green corduroy suit by Stephan Görner for the "Kleider machen Leute" campaign and exceptionally photographed by Daniel Baldus.

"Appreciation, recognition and respect for hard-working people are the messages of the campaign, because without these "Helping Hands", a city like Frankfurt would not function" says Sven Müller, co-initiator of the campaign. Höhl will also wear the tailor-made suit from the house of Görner at the Charity Gala on 10 November at the Hotel Kempinski. There he will walk as a model himself on the red carpet; and this next to famous personalities such as Bundestag Vice President Wolfgang Kubicki or Tagesschausprecher Jens Riewa.