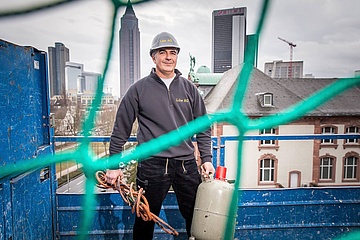 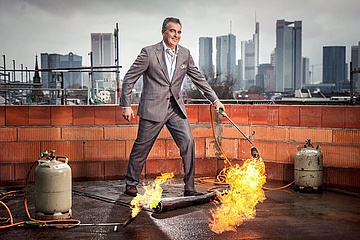 On the roof of the museum

Generations of children have marveled, admired or met wide-eyed lizards, snakes or dinosaurs at the Senckenberg Museum in Frankfurt, Germany. The present building is one of the largest natural history museums and was built between 1904 and 1907 according to the plans of the architect Ludwig Neher, in the immediate vicinity of the Johann Wolfgang Goethe University, which was only founded in 1914. It shows the present diversity of life and the development of living creatures, as well as the transformation of our earth over millions of years.

But the building has now been at the mercy of wind and weather for over a hundred years. It is clear that repair work on the façade inside or on the roof is always necessary so that children and adults, teachers and pupils can continue to view the special or permanent exhibition.

Dragan Marinovic (49) has been a roofer for 21 years and has been working on the museum's roof since late 2015. A physically demanding job and especially in winter, with freezing temperatures, rain or snow, not the most comfortable workplace. He welds bintum sheets overlapping and in several layers on different substrates with a large Bunsen burner so that the flat roof does not leak.

Born in Serbia, he nevertheless loves his job at Löw AG because he enjoys working in the fresh air, nice colleagues and often a beautiful view of the Frankfurt skyline. The father of four has not yet been to the museum himself, but wants to tackle this project soon, time permitting. "I used to be a goalkeeper and enjoyed playing football, but today I'm happy to watch the games on TV after the hard and physically demanding work." For the campaign "Clothes make the man" he "got dressed up" and exchanged his work and safety clothes for a chic tailor-made suit by Stephan Görner for the photo shoot on the roof of the museum.

Recognition, appreciation and respect for people with extraordinary professions is the message of the initiators Stephan Görner and Sven Müller. "Every month, a new motif of a different occupational group is published and presented to the public" so Sven Müller. And Stephan Görner adds: "After the "Worschtdealer", the roofer is the second motif in 2017, which is photographed by Nikita Kulikov and presented to the public. At the end of the year, the twelve motifs will once again become an annual calendar, which will be presented at our charity gala and handed out to the guests and amateur models."

More info can be found at: Www.kleider-machen-leute.net