Clothes make the man - showdown on the apron
from FFM Aktuell 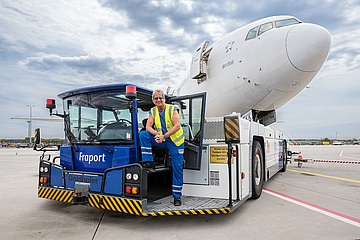 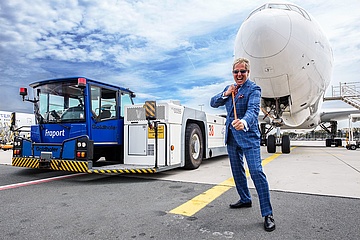 Holiday season is travel season. This summer, millions of German citizens will once again travel by car, train or plane to their well-deserved holidays. In the summer of 2018, 99 airlines will take off from Frankfurt Airport (FRA) to 311 destinations in 97 countries around the globe. On the first holiday weekend alone, up to 230,000 guests flew from Frankfurt to their vacation - per day. Perfect logistics are necessary for this to function smoothly. Approximately. 81,000 people work at Frankfurt Airport, more than 21,000 in the Fraport Group. Udo Peschel (53) is one of them. He has been an aircraft tug driver since 2006 and ensures that the aircraft are ready at the right place at the airport at the right time. He also assists the aircraft in leaving their parking positions - because aircraft cannot reverse on their own.

With his beefy tractor, a Goldhofer Ast 1, he can pick up large machines and "re-park" them. Usually he works in protective work clothing. On the occasion of the campaign "Clothes make the man", however, he exchanged them for a chic tailor-made suit from Frankfurt's tailor Stephan Görner. Hardly any other city is so characterized by "pinstripes and ties" as the metropolis on the Main. But that is only one side of the city. In addition to the glamorous business world, there are many people who work in the "engine room of the city" or at Frankfurt Airport. Whether in overalls or uniforms, they ensure day after day that Frankfurt remains safe and clean. They work to ensure that the city and the airport function properly. Unfortunately, public recognition for this is often too low. With the photo series "Kleider machen Leute" (Clothes make the man), Frankfurt tailor and men's outfitter Stephan Görner, PR specialist Sven Müller and photographers Angela Kropp and Daniel Baldus, who are new to the team, are once again putting the spotlight on a dozen people in 2018 who perform jobs that typically do not involve wearing a suit at their workplace. These twelve people will be staged at their workplace in a custom-made suit. Every month a new photo will be published and presented to the public. At the end of the year, there are 12 people from Frankfurt who, representing many, show a point of view that we have not perceived before.

Udo Peschel felt visibly at ease at the photo shoot, which was first implemented by Angela Kropp for the campaign. He looked like cult singer Rod Stewart, of whom he is also a big fan, as he came down the stairs of the plane he was changing in wearing his new blue virgin wool suit with light blue check design, a matching light blue shirt, tie and pocket square.

For fun, he tried pulling a Boeing 777 himself once with all his muscle, but found that 350 tons was just too heavy for him. "An unequal test of strength, but I enjoy such actions a lot, it's extraordinary and a nice change from the responsible job. A few times I've also acted as an extra in TV crime cases, such as Ein Fall für zwei or Tatort." Otherwise, Peschel enjoys going to concerts by Peter Maffay, Udo Lindenberg or the Electric Light Orchestra, riding his motorbike and doing lots of sport. He gets to keep the new tailor-made suit and will wear it at the charity gala "Kleider machen Leute", on November 10 at the Hotel Kempinski, where he will of course be guest of honour.

More info can also be found at: Www.kleider-machen-leute.net