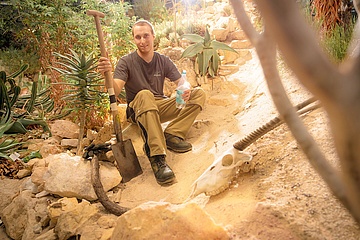 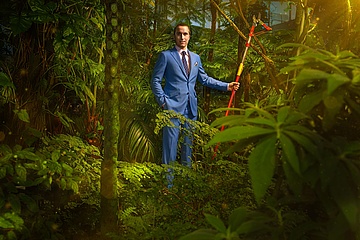 The campaign CLOTHES MAKE PEOPLE continues in 2022. To start the new year, Timo Riering, master gardener at the Palmengarten Frankfurt is at the center of the campaign. And for good reason, since the Palmengarten and Botanical Garden celebrated its 150th anniversary in 2021. One of the attractions is certainly the 5,500-square-meter Tropicarium, built in the 1980s. Plants of the mountain rainforests and cloud forests, the evergreen lowland rainforests, the alternately humid monsoon and trade wind forests as well as the mangroves and coastal forests grow here. In the southern star plants of the dry tropical regions are found: from dry forests and savannas, thorn forests as well as the semi-deserts and cloud deserts.

Whoever visits the Tropicarium can thus take a botanical trip around the world within a very short time: Here you stroll through America and Mexico with its meter-high euphorbias and giant mother-in-law seats, then a few steps further the rare Welwitschia mirabilis, which grows exclusively in the Namib Desert and in southern Angola, past aloes and baobabs from Madagascar, palm ferns, macadamia and grass trees from Australia. In the neighboring complex of the humid tropics grow pepper bushes, cocoa trees, heliconias, giant bamboo, mangrove trees, bromeliads, the largest orchid in the world, Seychelles palm, sealing wax palm and in general palms and ferns of various kinds.

This particular species is the workplace of 28-year-old master gardener Timo Riering. Since February 2020, he has been responsible for ensuring that the approximately 3,200 plants in the Tropicarium are watered, cut, fertilized, repotted and sown. He lovingly rearranges the beds and enjoys talking to and with visitors about the plants. He has turned his hobby into his profession. He is particularly taken with the approximately 15-meter-high oil palm in the rainforest house. "There we must already with lift truck and telescope shears into the palm treetops, in order to cut off old leaves," says Riering.

For the campaign "Clothes make the man" Timo Riering let himself in the fine thread of tailor Stephan Görner, first in the fog desert and then in the fog forest of the Palengarten, set by photographer Manuel Dorn in scene. The goal is to photograph people with unusual or sometimes dangerous professions, which usually do not wear a tailored suit or costume at their workplace, but without which a city would not function, said Sven Müller, co-initiator of the campaign.

The lighthouse project is the fashion and lifestyle charity gala "Kleider machen Leute", which has been postponed to April 2, 2022 due to the ongoing pandemic and will take place at the Hotel Kempinski Gravenbruch. 300 guests will experience not only a VIP fashion show but also the appearance of Timo Riering, who will take to the catwalk as a model in his chic, baby-blue tailored suit, shirt and sneakers. Donations and proceeds from the raffle will go to the LEBERECHT Foundation, which supports children in need and their families. Tickets to the 2G+ event can be ordered at http://www.kleider-machen-leute.net/gala/ticket_bestellung.html. The price of 250 euros per person includes the sparkling reception, the 3-course candlelight menu, all drinks of the evening and the great show program. Star guest is Penny Ford, aka SNAP!, who will perform her world-famous hits such as Rhythm is a dancer or The Power.