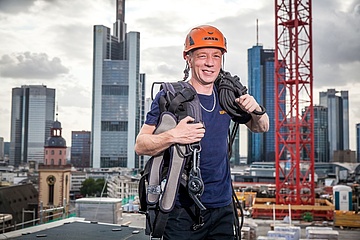 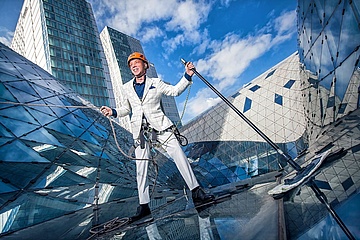 It is one of the most spectacular buildings in Frankfurt. MyZeil, shopping center, gastro temple and leisure world for many people from the Rhine-Main area. The center's glazed roofscape offers direct views of the sky and is a popular photo motif for visitors.

Mike Weitkamp (44J) is responsible for keeping the glass roof clean and carrying out maintenance work. He has been working in and on the building since 2009. First as a craftsman on the construction site, and after his special training on the glass roof of MyZeil, as an industrial climber. Depending on the weather, it takes three to four weeks to completely clean the glass construction, which covers 12,000 square meters. He works unconventionally from window to window with a squeegee and special cleaning agents. The trained nurse is not afraid of heights. But he does have respect. Safety is his top priority. So he is always double-secured by a suspension and safety rope when working on the roof.

Due to his unusual profession, Weitkamp has already performed some unusual actions on the glass façade of MyZeil. For example, he abseiled down dressed as Batman at the opening of the new Elbenwald shop or as Santa Claus when opening the calendar windows.

For photo shoots on the occasion of the campaign "Clothes make the man" he was now allowed on the roof of the shopping center again with photographer Nikita Kulikov. Stephan Görner, Frankfurt's well-known tailor, tailored him a cream-coloured summer jacket with a dark blue check pattern as well as a polo shirt and white trousers. The "Clothes Make the Man" photo series showcases professions and the people behind them who don't normally wear suits in their workplaces and who receive little public attention or recognition for the heavy or dangerous work they do. "We hope that these occupational groups will gain appreciation and respect through the campaign and will be equally appreciated as other professions," said Sven Müller and Stephan Görner, idea generators of the campaign.

The shoot was also special for Kulikov, who "snaps" all the campaign photos. "The impressive architecture of the glass facade thrilled me, the abseiling after my survived shoulder surgery took a lot of strength and energy, but it was totally fun," says the "artist" at the camera.

The October motif of the campaign will also be shown at the Charity Gala "Kleider machen Leute" on November 11 in the Gesellschaftshaus Palmengarten. Here Mike Weitkamp will also stroll down the red carpet and present his chic suit from the house of Görner.

The gala, at which Prime Minister Volker Bouffier is the patron, Mayor Peter Feldmann and many other prominent personalities have confirmed their attendance, is under the sign of charity. The proceeds from the raffle and all donations will go to the Leberecht Foundation, which supports needy children and their families. A great program has organizer Sven Mueller "on the legs put". Star guest is Marianne Rosenberg, who gives her hits to the best. In addition, bands and DJ KC will play music until the early hours of the morning. One of the highlights is the VIP fashion show, where celebrities like Kim Hnizdo (GNTM winner) the politicians Wolfgang Bosbach and Wolfgang Kubicki and the actors Peter Lohmeyer and Mark Keller present the fashion of Stephan Görner on the catwalk.

Tickets incl. champagne reception, all drinks, a candlelight dinner cost 250 euros in the ballroom, 195 euros in the gallery and can be purchased via the homepage www.kleider-machen-leute.net ordered