CLOTHES MAKE THE MAN: In a tailor-made suit in the Main
from FFM Aktuell 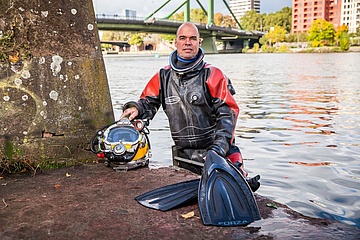 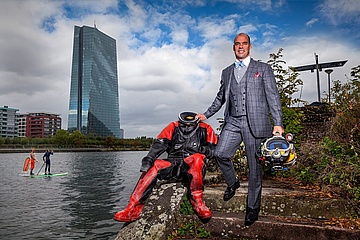 It is one of the most exciting professions of the campaign "Kleider machen Leute". As the last motif in 2017, Stephan Görner, Sven Müller and photographer Nikita Kulikov photographed the professional and sewage treatment plant diver in a tailor-made suit on the River Main. Recognition, appreciation and respect for people with extraordinary professions is the message of the initiators. Every month a new motif of a different occupational group is published and presented to the public. This year it was, among others, the Worschtdealer, the Goldprüfer or the Kellermeisterin. Now it is the professional and sewage plant diver!

Michael Sanz Bayer (51J) is a trained civil engineer. In 1986 he then decided to join the Bundeswehr/Navy and was deployed for four years as a mine diver. After that he decided to become a freelance professional diver. Today he dives all over the world, not for fun, but to perform necessary work such as burning, assembling, searching and salvaging ships or vehicles and construction site work under water. He also works at the sewage treatment plant, disassembling pumps, replacing fan plugs, and pumping out sludge, for example.

In doing so, he has no sight, but must rely entirely on his sense of touch. A job that certainly not everyone would do, because anyone who has ever inspected a sewage treatment plant knows what "innards" are there. However, he prefers to dive with sight, as he did in Helgoland to carry out necessary assembly work in the wind farms. His thick neoprene diving suit protects him in all waters. He took it off during the shoot for the campaign "Kleider machen Leute" (Clothes make the man), in which twelve people with unusual or dangerous professions are shown in a tailor-made suit or, in the case of ladies, in a costume. Tailor Stephan Görner dressed him in a chic grey tailor-made suit with a striking blue check pattern as a 3-piece, plus a 2-row waistcoat and a blue and white striped tailor-made shirt as well as a corresponding bowtie. With this he surely cuts a fine figure - maybe not under water - but definitely on special occasions, because that's what Michael Sanz Bayer will surely wear him for.

More info on the campaign can be found at: Www.kleider-machen-leute.net