Clothes make the man in October: In high heels and pantsuit in the hop garden
from FFM Aktuell 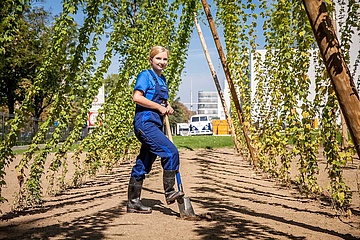 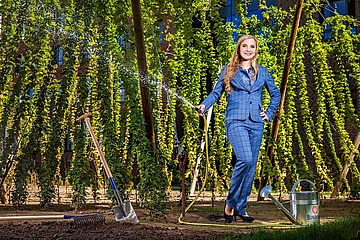 The campaign CLOTHES MAKE PEOPLE goes into the next round. The focus this month is Viola Tuchel. She is 19 years old and in her second year as an apprentice brewer and maltster at Binding Brewery. She normally does activities that are part of her apprenticeship. But since May 2017, she has been doing another activity that is closely linked to her passion for beer. Together with other budding young brewers at Binding Brewery, she is responsible for the newly planted hop garden on Sachsenhäuser Berg.

"A great project, because this way we learn how to brew from planting the hops to the finished product," explains Viola Tuchel. She planted the seedlings herself, weeded, watered and checked the plants for growth. Then, a few days ago, the first harvest took place. "After all, this can produce about 300 liters of beer. Although the hops are only added in small quantities when brewing beer, they give the barley juice its unmistakable character. In addition, the hops increase the shelf life of the beer and provide the stable head," adds the budding brewer.

For the photo shoot of the "Clothes make the man" campaign, she swapped her work clothes for high-heels and a chic trouser suit with a glencheck pattern by Frankfurt's well-known bespoke tailor Stephan Görner. Why is this interesting? Because it illustrates the idea behind the "Clothes make the man" campaign. Here, the people behind their professions are unusually staged by photographer Nikita Kulikov. People who don't usually wear a suit in their workplace. "We hope that these occupational groups experience appreciation and respect through the measure and are equally appreciated as other professions," say Sven Müller and Stephan Görner, idea givers of the action.

The eighth motif of the campaign will also be on display at the charity gala "Kleider machen Leute" (Clothes make the man) on November 11 at the Gesellschaftshaus Palmengarten. The event is under the patronage of Minister President Volker Bouffier and is being held in aid of the Leberecht Foundation. The foundation cares for disadvantaged or disabled children and young people and their families. The organizer expects 450 guests, including Frankfurt's mayor Peter Feldmann. On this evening, Viola Tuchel and her boyfriend Lukas Hein will also stroll down the red carpet as guests of honour. Star guest Marianne Rosenberg, who will perform her popular hits, will ensure an entertaining evening. In addition, various bands and DJ KC will present musical highlights until the early hours of the morning. One of the highlights is the VIP fashion show, where well-known personalities such as the CDU politician Wolfgang Bosbach present the fashion of Stephan Görner on the catwalk.